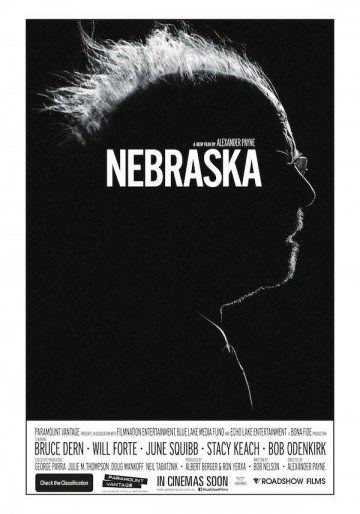 It’s tough for a filmmaker to get a reaction from people when there’s not a lot going on up on the screen. For some people, deadpan and wistful might translate to unfunny and boring. Nebraska is one of those movies that will divide people into two camps — those who get what it’s all about and those who don’t see the point. I side firmly with the first camp. Sadly, it’s too easy to just throw your hands up in the air and give up. You almost have to switch to a slower gear to even ride along on this comedic drama wrapped in a road trip. Boasting at least two standout performances and a lot of location shooting to add character, Nebraska touches upon issues of aging, father-son connections, family dynamics and revisiting the past as a sort of perfect off-kilter concoction for the holidays.

Nebraska is the latest from Alexander Payne, a writer and director whose résumé other filmmakers would kill to have. Payne cowrote (with Jim Taylor) and directed Citizen Ruth, Election, About Schmidt and Sideways. Payne and Taylor shared writing credits on Jurassic Park III, which perhaps brings them down a notch, and Payne cowrote/directed The Descendants before focusing exclusively on directing Nebraska from a script by Bob Nelson for his first feature film. Nebraska‘s predecessors since Citizen Ruth have all been based on novels, and this film is a return to Payne’s home state where Citizen Ruth, Election and About Schmidt were also set. Part quest and part road trip, the film takes on the character of its titular state. Note that the movie is not named after one of the characters or the impetus for the road trip. Much like Fargo, the location is as much a character as the quirky individuals present.

The film opens with a determined Woody Grant (Bruce Dern) walking along the highway to get from his home in Billings, Montana, to Lincoln, Nebraska. Look on a map, and you’ll see how ridiculous this attempt would be. At first, it might appear that this is just another senile, wandering senior, but there’s so much more to Woody than appearances. He received one of those sweepstakes letters that declares that you may already be a winner of a million dollars, and he wants to believe so strongly in something again in his empty life that he’s going to get to Lincoln if it kills him. His electronics salesman son David (Will Forte, formerly of Saturday Night Live, in an uncharacteristic dramatic role) takes on the unenviable role of driving Woody to Lincoln to dispel the myth of the million dollars. Woody’s other son, Ross (Bob Odenkirk looking a lot like Kevin Costner), is a local newscaster in Billings, and he and his mother Kate (the unforgettable June Squibb) are dead set against this road trip.

The comedy is as dry as the landscapes in the four states that Woody and David traverse to get to Lincoln. Early scenes like Woody’s take on Mt. Rushmore hint at a rather spare comedy that clearly isn’t enough to sustain an entire film. Fortunately, an accident forces Woody and David — later joined by Ross and Kate — to touch down in the fictional Hawthorne, Nebraska, for the weekend. Woody makes it clear that he doesn’t want to go to Hawthorne, but once there, both Woody and David embark on a journey of revelations about Woody’s past. David and Ross only remember Woody as an alcoholic father, and every townie seems to have a different take on the man. The time spent in Hawthorne is a distinct mixture of drama and comedy with each bubbling to the surface at times in a lazy rhythm. Woody and David stay with Aunt Martha (Mary Louise Wilson) and Uncle Ray (Rance Howard in a film not directed by his son Ron), and David’s hayseed cousins Bart (Tim Driscoll) and Cole (Devin Ratray) are the butt of many jokes. A running gag about driving distance and how long it takes to get places is about the level of comedy in Nebraska. An iconic shot of eight men sitting in the living room and watching TV is a barometer of the action in the film. They have blank stares on their faces and say almost nothing to each other even when they blurt out something.

The characters and performances are what would make you enjoy Nebraska. Dern is at the top of the list for this venture, and this is one of those career milestones that he couldn’t have passed up. Dern already picked up the award for best actor at Cannes earlier this year, so it’s no surprise that people are taking notice of his Woody. Dern has a halo of disheveled hair that recalls that famous booking photo of Nick Nolte some years ago. Dern expertly walks the fine line between dementia and orneriness, and Woody almost always responds to other characters with a “what?” as if he was brought back to our plane of reality with their comments. Forte is a welcome surprise here, and that’s perhaps why he took this part. It almost puts his silly characters like MacGruber out of your mind. Odenkirk really doesn’t have enough meat in his role. How can you shine when Squibb steals every scene? Kate’s acid tongue and absence of a filter make her scenes the funniest and most memorable of the movie. An eternal nag, Kate fires on all cylinders in a cemetery scene. When she recalls telling someone that “I ain’t fiddlin’ with no cow titties; I’m a city girl,” you get an idea of how fiercely independent she is. Later, she emerges as someone loyal to her screwball husband and sons. It would be a shame not to see Squibb on some best-of lists for this year. Stacy Keach also makes his mark as Woody’s former friend and partner Ed Pegram. Without his trademark moustache, Keach loses familiarity but is perhaps better able to establish this menacing local. 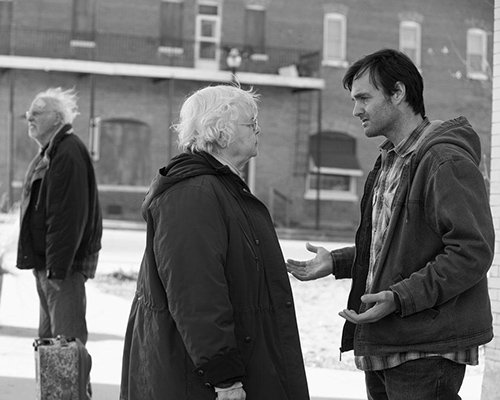 Many will question the use of black and white instead of color. I actually can’t imagine this movie in color. It would be too bright for all of the bleakness in the environment and the characters. Hawthorne is like so many other places throughout America that have lost their way in the economy, so Nebraska is as much an economical wasteland as it is an emotional one. The lack of color seems to fit the step back in time, too, which Woody and David’s journey ultimately is. They are able to look at Woody’s old life in Hawthorne with a more current perspective. Payne even used the old 24-star Paramount logo to bookend the film. The music by Mark Orton perfectly matches the pace of the film and its lumbering characters, but the major cues are not original. Orton reuses his themes from another movie set in the Heartland called Sweet Land. They fit Nebraska so well that I can forgive the self-plagiarism.

Twice or three times a year, I head upstate with my father and sister to visit the graves of my mother, brother and other relatives in Mahanoy City, PA. Once you get off the Turnpike and head into more rural areas, it feels like a different world, even if the Walmart on the hill sells the same items that other Walmarts do all across America. Watching Nebraska is just like taking that journey from the familiar into the homey, friendly and quiet areas upstate. Maybe that’s why I enjoyed the film so much and could slow myself down for Woody’s quest. Nebraska is a textural departure for Payne that still fits alongside his other films as a character study that embraces universal truths.