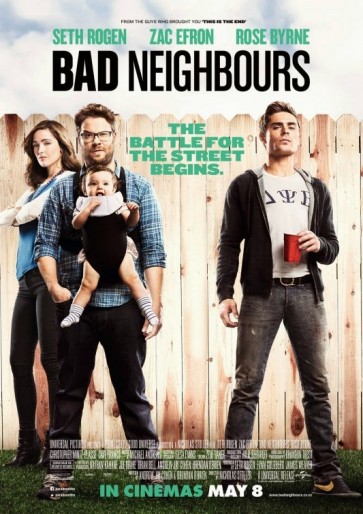 Comedies go in cycles, and every now and then, an outrageous gross-out comedy surfaces and tries to match the success of past winners like The Hangover or just about every Farrelly Brothers entry. We’re the Millers was one of last year’s funniest films, and it managed to keep the laughs coming at a tremendous pace. Neighbors is this season’s valiant-but-flawed attempt to take the throne for at least the next couple of months. After ruining its premise within 15 minutes, the rest of the experience is hit or miss with some truly funny or original scenes followed by long stretches of recycled humor. Uneven at best, Neighbors will likely be forcefully evicted from the memory by the next great laugh fest.

Director Nicholas Stoller has a mixed bag of successes with his work as director on the dynamite Forgetting Sarah Marshall and then diminishing returns as writer/director of the sorta-sequel Get Him to the Greek and cowriter/director of The Five-Year Engagement. Neighbors is Stoller’s attempt to remember Sarah Marshall, but it just doesn’t have the charm of that movie as well as the better pacing. Comedy is tougher than people realize, and a visit to any comedy club should drive home that point. Writers/executive producers Andrew Jay Cohen and Brendan O’Brien previously collaborated on the 2009 video short Acting with James Franco, but this film is really their big break. They certainly show promise, so with some experience, they might write the perfect comedy in this genre in a few tries. I really dislike when films desperately try to latch onto others as if they should be connected in viewers’ minds. Neighbors uses the line “From the Guys Who Brought You This Is The End,” and although producers Seth Rogen, Evan Goldberg and James Weaver delivered that 2013 gem, it’s deceptive to put Neighbors in the same category or level of quality.

Neighbors has an old premise that it mines poorly. Mac Radner (Rogen) and Kelly Radner (Rose Byrne actually using her native Australian accent) just bought a house in a town called “Ardendale.” They have a peaceful, humdrum existence and a baby girl named Stella, so when a frat moves in next door, they freak out in anticipation of the expected loud parties and crazy behavior. The Delta Psi Beta frat is headed by Teddy Sanders (Zac Efron) and Pete (Dave Franco), and other prominent frat members include Scoonie (Christopher Mintz-Plasse aka Superbad’s McLovin) and Garf (Jerrod Carmichael). The trailer would lead you to believe that this film depicts an all-out war between the Radners and the frat boys. That’s only part of the film, and my biggest complaint with the movie is how they deflate that tension in the first few scenes by having the Radners attempt to befriend the frat guys before their relationship becomes confrontational. That tension is never fully regained, so the heart of the story dissolves as quickly as the frequent clouds of pot smoke.

I like the leads here. Rogen and Byrne portray a believable young couple with their awkward sex scenes, inexperienced parenting and inability to really handle the situation except for a few smart actions. Efron and Franco pull it off as smarmy frat guys. I’m always suspicious now when I see Franco in a film as opposed to his brother James Franco. They look and act so alike that I often wonder if filmmakers wanted James and settled for Dave. That may sound cruel, but the brothers simply aren’t as distinct as Owen Wilson and Luke Wilson. The leads save the movie, and the supporting cast doesn’t fill in the holes with any memorable work. Ike Barinholtz and Carla Gallo play the Radners’ divorced friends, yet they don’t even approach the quirkiness I expect from best-friend characters. It’s pretty sad when you have an actor with a debut as legendary as Mintz-Plasse and Scoonie just sits around most of the time with one simple sight gag as his contribution to this movie. If you underutilized Mintz-Plasse, you blew it. McLovin’s originator should never be boring. Blink, and you’ll miss a cameo by the guys from The Lonely Island, and a former Friends star has a scene or two as a college dean. It’s clear that the filmmakers are part of a wider group of talented comedians, so I’ll just have to categorize Neighbors as a misfire. 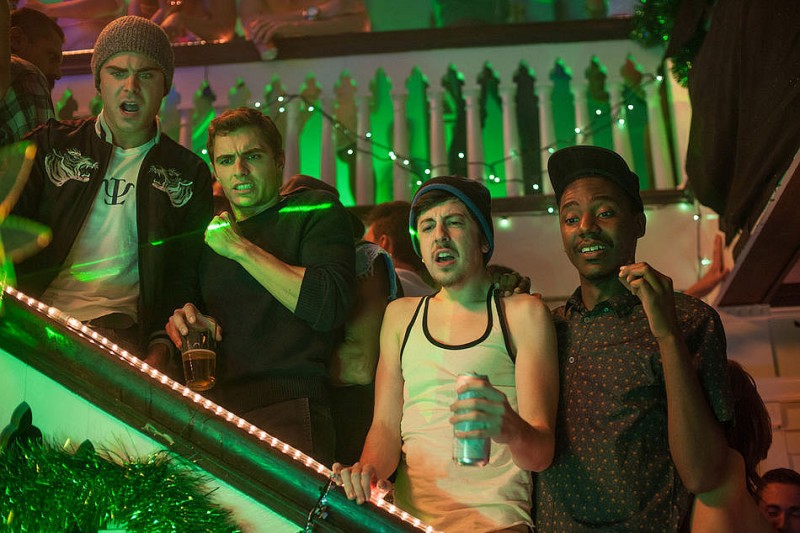 The laugh level rises and falls too much here. There are some truly memorable scenes like a sequence that involves Byrne, Rogen and a breast pump, and there are many pedestrian jokes, too. Is there a clause in Rogen’s contract that states that he must do a certain percentage of pot humor in every movie? The parties are nothing you haven’t seen before in countless other frat films. I’m sure that it was more fun being an extra on this production than watching it in a theater. All is not lost here. Symptomatic of the mixed nature of the movie is a snippet that we get to see of a frat social themed to a certain famous actor’s oeuvre. The filmmakers just don’t seem to recognize the best parts or potential of their own ideas. That themed party could easily have been a hilarious major sequence, and it’s instead relegated to a brief glimpse of the full thing through a window. I liked some sight gags with an unusually shaped topiary, and the use of airbags made me laugh the hardest even if the scenes were unrealistic. This is an R-rated comedy, so there are plenty of penis and dildo jokes. Neighbors doesn’t really get filthy; it’s more of a playful vulgarity that reminds me of Rogen’s Zack and Miri Make a Porno.

The filmmakers have some future good comedies in them, but Neighbors isn’t one of them. There are plenty of scenes of topless guys and girls here, but for every scene of an amazingly sculpted Efron, there seems to be an equal shot of a topless Rogen for balance. If you think about it too much, the entire story doesn’t make sense because, in today’s world, a frat house could never just move into a neighborhood without advanced warning and countless hearings. Yeah, don’t think about it, or you’ll ruin whatever good there is in the experience. Turn your comedy sensors to neutral, and go along for the ride. Watch at least the beginning of the credits for a creative approach to a cast list.