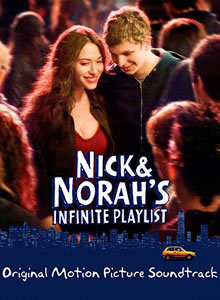 This week I’ve been a bit busy (plus the Phillies won the World Series) so I forgot about having seen Nick & Norah’s Infinite Playlist. That comment alone is not one that suggests lots of upcoming positive praise.

This is another in a growing list of movies trying to be like all the other Judd Apatow romantic comedies of recent history (but isn’t an Apatow movie). It even features several actors that were featured in some of those same movies. I suspect there’s a relationship in there somewhere but it’s not hyped in any way if there is.

That being said, it certainly didn’t come packaged with any of the laughs of the other movies. This one is a pretty flat experience with some pretty ridiculous concepts, a bevvy of stereotypes and only a few decent laughs throughout.

I wasn’t in a rush to see it because it stars a now perennial punching bag of mine in the form of Michael Cera. See past blogs regarding my total disdain for this actor. In every film he seems to play the same exact guy. Each time he’s supposed to be the geeky guy trying to win the girl but in each case I think it fails because he’s simply gay. I don’t know if the actor himself is gay but if there’s one thing Michael Cera knows it’s how to play gay even when he’s not trying to play gay.

Norah, played by Kat Dennings, is a likeable enough character and probably the one saving grace of the movie. I last saw her as the virginal daughter in Apatow’s 40 Year-Old Virgin. She’s cute here, does a good job and manages to keep your interest in the movie going long after it should have been abandoned. I think she’ll sadly have to work overtime to distance herself from the bad job of casting here and the lackluster script. She has better things in her future hopefully.

This movie, in the end, felt like a very low-bandwidth version of the excellent, Juno except that it isn’t in the same league. I don’t feel ripped off having seen it but I could have had as good a time sitting at home napping.