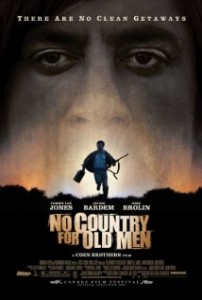 We saw No Country for Old Men tonight while it’s in limited release. The movie showed to a packed house.

It’s from the Coen Brothers and stars Tommy Lee Jones, Josh Brolin and an unknown actor (Javier Bardem) playing the main role of the psychopath. There’s also some great character work from Woody Harrelson and Tess Harper. The movie was quite an experience. The acting is Oscar-worthy from start to finish. For most of the movie the audience was sitting on the very edge of their seats. Tension filled the theater. Every scene brought shrieks or much-needed tension-breaking laughter.

And then, suddenly, about 80% of the way through the movie, it takes a left turn down an alley we never saw coming for no comprehensible reason and never comes back. The audience let out an audible groan coming from throughout the theater. Then the movie continued towards yet another ending and when it finally concluded everyone just sighed. You could hear people saying, “What? That’s it? Are they kidding?”

The movie had everyone. We were all taken with it and ready for the story the movie presented to us at that point. Then it’s as if the Coen brothers said, “Oh, that’s not the story we’re telling. Here’s the actual story…” Where they took us to no one wanted or cared about.

The reviewers keep comparing this to another of the Coen’s films, the masterpiece Fargo. They seem to think this is of similar caliber. It’s not. Fargo is a complete movie. This one leaves you feeling short-changed. It’s yet another example of reviewers, especially those who are students of film, being blown away by the tremendous performances to be had here. For the rest of us, it’s about the complete story. Most people aren’t happy with spending two hours getting a wonderfully detailed plot only to be handed an ending that seems to have come only as a result of the project running out of funding.