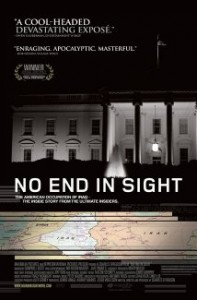 Just the other night we decided to check out the documentary No End in Sight which is all about the Iraq war. My biggest problem with it is that it never lives up to its name. It’s much more about a retelling of how we got to where we are than in telling us why it’s not going to end anytime soon. The other problem with it is that little is explained about the people who are interviewed about the film. We get their names and titles and that’s about it. We’re not given any real insight as to their qualifications, their politics (if any) or their dedication to their work. One person after another chimes in with another short burst comment about why things are so screwed up and then we’re onto the next person. You can also sense that a lot of the interviews proved hard to turn into material for a film. The key case in point is with General Jay Garner. He goes out of his way to say as absolutely little as possible so as to not point any fingers. His responses often are little more than short single words or phrases. You sense that a lot of the people in it have a lot more to say but don’t. You also sense that a lot of other people should have been approached but weren’t. Where’s Richard Clarke for example?

The film’s narrated solidly by Campbell Scott but he does have a bit of a monotone quality that can put you to sleep if you’re not diligent in your attention.

In the end, if you followed the news, you learn very little, if anything, that you didn’t already pretty much know before. The film acts as a concise reminder of all those missteps condensed down into a single movie. It also does nothing to suggest what could be done to rectify things. The end result comes off as one big case of Monday Morning Quarterbacking. How 94% of reviewers recommended this is beyond me. It’s not a bad documentary but it’s certainly very lacking in real, original information.