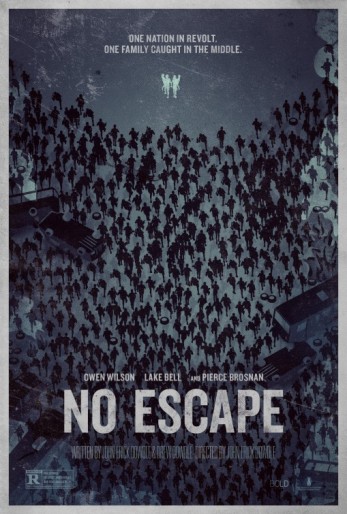 Movie critics often compare films to roller coasters. There are highs and lows as well as exciting parts and quiet moments. I’ve done it myself. Sometimes, that’s exactly what the experience in the theater feels like. Imagine if a ride took off and stayed at an intense speed for the duration. They exist. These speed-focused rides are usually referred to as launch coasters, and the fastest in the world — the Formula Rossa at Ferrari World in Abu Dhabi — clocks in at 149 mph. That’s the best comparison that I can make for No Escape. It’s an intense experience with no letup for almost its entire running time. No Escape draws you in and keeps your heart pumping as only the best thrill rides can do.

If you had revealed the filmmakers to me before I saw No Escape, I would not have expected this level of effort. Cowriter/director John Erick Dowdle and cowriter Drew Dowdle are brothers who similarly collaborated on horror flicks The Poughkeepsie Tapes, Quarantine and last year’s ambitious, creative As Above, So Below. Collaborators who come up in the horror genre usually move on to flicks in the horror, sci-fi or fantasy realms with bigger budgets and better casts. No Escape is a complete left turn for the Dowdle brothers, but it’s perhaps their background in terror that makes the movie so good. These guys know how to push your buttons, so they’ve now won me over to accept their work in any genre.

The plot is very simple, and the journey is terrifying. The Dwyer family is moving from Texas to Asia so that engineer Jack (Owen Wilson) can work on a water project taken over by an American company. Wife Annie (Lake Bell) is skeptical about the move, and daughters Lucy (Sterling Jerins) and Beeze (Claire Geare) already miss home. When they land, they’re completely lost, but a charming rogue named Hammond (Pierce Brosnan) who befriends them on the plane assists them in getting to their hotel by calling in his taxi driver friend Kenny Rogers (Sahajak Boonthanakit). The family only gets one night of peace in the hotel before all hell breaks loose. When Jack wanders the streets to find a newspaper, he walks right into the middle of a clash between rebels and police that follows him back to the hotel where the rebels happen to be killing any Americans because of the water contract. The family must avoid death by staying one step ahead of the rebels and trying to get straight outta Asia, and much like the family, I felt for the entire movie that nobody was safe and anyone could be captured or killed at any time. I was most impressed with that feeling of dread because most films like this go into “hero mode” where the protagonist is unstoppable. Leave that idea behind.

Wilson would not exactly be my first choice for this role. He excels at wry comedy, so the goal was for him to inhabit the role of Everyman. He’s quite convincing, and the pain on his face as he fears for his family makes you forget his comedic past. Bell is an underrated, complex actress who first got my attention in the TV series Surface (aka Fathom before a makeover), and she has played all kinds of parts over the years. She handles the protective mother well, and an early scene hints at something else going on with Annie that we never learn but that prepares us for any surprises from her. The child actresses have a handful of major credits between them — Jerins was in World War Z and The Conjuring — and this challenging movie was no walk in the park for them. Wilson and Bell must have worked with weights a lot because they pick up or carry both children multiple times on this journey. If you just add children to an already frightening situation, it becomes almost unbearable. Brosnan takes a subordinate position here. As much as I like him, that was the right decision so that the focus stays on the Dwyers. 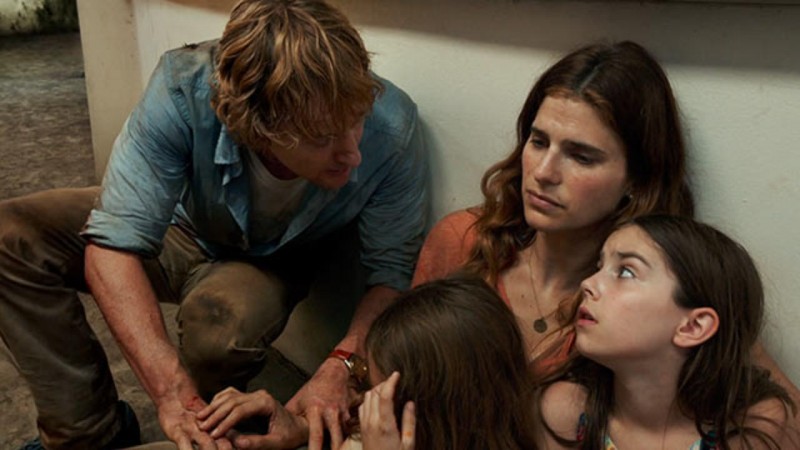 No Escape was filmed in Chiang Mai, Thailand, but there’s no mention of Thailand anywhere in the plot even though you can figure it out almost immediately. It’s no surprise that Thailand did not want the story setting there even though it was filmed there. No Escape does not paint a pretty picture of the region. It shows murderous Asians screaming “blood for water” and killing Americans in cold blood on the streets and in their hotel rooms. A nice touch is that a welcome banner with Jack’s picture on it later becomes a means of identification to kill him. I haven’t heard of any recent coups in Asian countries, and Americans are more likely to be killed in random attacks than a focused hunt by bloodthirsty jingoists. To further cloud the location of the city and country, a plot point later in the movie puts it in a rather impossible place kind of like guessing which Springfield in America inspired the setting of The Simpsons. The filmmakers flipped all of the signs upside down and masked Thailand as best as they could to not foster xenophobia, which really suits No Escape because it could just as easily take place in South America or Africa as Asia.

At its heart, No Escape is less a political film and more a terror flick in disguise. Instead of one killer on the loose in a house, you have a group of nameless murderers chasing the family all over the city. As with any horror film, you never know who’s going to die and when that might happen. No Escape maintains that spirit, and I was ready for anyone to bite the dust at any moment. The closest relative in theme to No Escape might be The Purge with its roving bands of killers looking for a brand of warped justice. Originally titled The Coup because of the political action as the catalyst for the events, the new title fits much better.

No Escape is a perfect shared movie experience rather than something that you watch by yourself. I could just feel the dread course over the audience at every turn, and there were plenty of moments of intensity where I felt that I couldn’t take it anymore. That rarely happens in cinema, and the Dowdles deserve props for pushing things that far. No Escape is less than two hours, but it feels like an eternity not because you’re bored but because you’re so fiercely held tight by the family’s experience. Once you’re comfortable in your seat like the roller coaster that I mentioned at the beginning, No Escape doesn’t stop dragging you along until the final seconds.