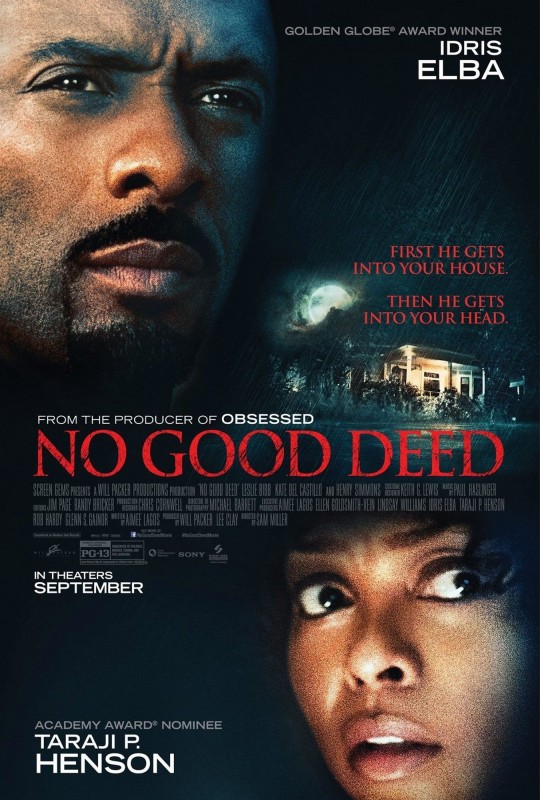 Movies are all about manipulation. Filmmakers have been using tricks to manipulate audiences since the very earliest recorded films that include a train coming directly at the audience and a magician disappearing repeatedly in flashes of smoke. These were simple matters of forced perspective and clever editing, but at the time, the audiences were fooled. Ever since then, we have continued to flock to theaters to be fooled, scared, moved, thrilled and brought to tears, even though we know that nothing that happens up on the screen is real. Even documentaries are deceptive because they take real footage and put it together in such a way to support an opinion or cause emotion. With all of this manipulation inherent to the medium, it’s insulting when a movie company decides to further toy with potential audience members through an elaborate campaign of deception. That happened this past week for No Good Deed. Purportedly a thriller with a super-secret plot twist, it’s instead an unoriginal movie of a certain genre that banks on the star power of its leads rather than a solid plot and writing.

If you’ve seen the trailer for No Good Deed, you’ve probably seen too much already. It’s our policy here at /comment to not reveal more than you need to know about a movie before seeing it or more than you would have seen in a trailer or on a poster. No spoilers here, even for this dud. I can tell you all about this movie without even touching upon the “twist.” It’s a rather simple plot. Colin Evans (Idris Elba) is in prison in Knoxville, TN, for manslaughter after a barroom brawl, and he’s up for parole after five years in front of a board chairman who refers to him as a “malignant narcissist,” whatever that is. When denied parole, Colin breaks free from his guards in a prison van and heads toward Atlanta to pay a visit to his ex-girlfriend Alexis (Kate del Castillo). When he crashes his stolen vehicle into a tree, he stumbles to the nearest house for help and finds Terri (Taraji P. Henson) alone with two small children. Terri’s husband (Henry Simmons) just left, and her best friend Meg (Leslie Bibb) is on her way over, so Terri cautiously helps Colin until a tow truck arrives. Instead, Colin charms Terri before he attacks her, and No Good Deed becomes the latest woman-chased-by-a-killer movie.

Director Sam Miller (mostly TV movies and series) and writer Aimee Lagos (writer/director of 2011’s 96 Minutes) are really in over their heads here. With almost nothing original about this film, they can only rely entirely on their leads and hope that it gets an audience. To their credit, Elba and Henson are dynamic leads who are engaging in each scene, and if they weren’t involved with this film, you would never have heard about it. Bibb is her typical beautiful and bubbly self, so she’s perfect in the role of the best friend who brings over some champagne to share with hard-working mother Terri. Elba has made some strides in recent years with his roles, and it’s important to note that he was on the receiving end of a stalker in 2009’s Obsessed. He plays a believable bad guy here, and Henson also convincingly sells her frumpy housewife character. The problem is the plot, which is full of moments when characters do stupid or uncharacteristic things that leave you shaking your head. A quick viewing of other films in this genre should explain to a screenwriter what to do and what not to do, and Lagos clearly didn’t do her research. Scream and Saw were so enjoyable and hugely successful because they took established genres and rules and turned them upside down to keep the audience guessing from beginning to end. Had Miller and Lagos taken that approach, this would be a different review.

Getting back to manipulation, let’s look at the poster for No Good Deed. I know that marketing teams spend hours or days on these things, and I have a beef with the more offensive of the bunch. The poster points out that Elba is a Golden Globe Award winner and that Henson is an Academy Award nominee. I only find such notices meaningful if the actors give performances at those levels. You don’t see such text on every Tom Hanks movie poster. It gets old, and it’s especially insulting if the marketers think that people are that easily fooled. However, Elba and Henson are both executive producers of this film, so is the inclusion of the award experience on the posters a case of not-so-malignant narcissism? The poster states that the movie is “From the Producer of Obsessed.” Tying this lousy flick to a somewhat-better one with the same actor is another old marketing gimmick. It may draw in some people, but most moviegoers probably forgot Obsessed intentionally because of Beyoncé’s awful performance.

Now back to the campaign of deception… Most movies are screened for critics in the days before their release, sometimes as much as weeks earlier. Sony and Screen Gems had screenings lined up all over the country for No Good Deed and canceled them with little notice and not much more explanation than that they didn’t want a “plot twist” to be spoiled for audience members before they went to the theater. There are a number of reasons for me to call bullshit on this bait-and-switch technique. Movie companies trust critics every single week of the year to not tell more about a film than they would like, and for the most part, there are no problems. Still, there are dumb critics who spoil plots. In many cases, studios don’t provide press screenings for the duds in their roster, and the idea behind that move is that critics will have to see the movies over the weekend and write about them no earlier than the following Monday, thus not affecting box office sales with bad reviews. The immediacy of social media has nullified the no-screenings trick because people walk out of a theater after the first showing and start tweeting and posting about how good or bad it is.

The campaign behind No Good Deed descends to a lower level of stupidity. They not only canceled the screenings in a public way, but they also slyly used a “plot twist” as the reason. I honestly believe that they thought that critics would spread the word about a plot twist in response to the canceled screenings and that moviegoers would hear about this and be compelled to see this movie to discover what could be so secret. The marketers are lucky that they weren’t within arm’s reach or vocal range after I left the theater. Instead, I’ll do my job and tell you that there is no dramatic plot twist here. I’ve seen it all, from it’s all a dream and dude looks like a lady to the hero is really the killer and your enemy is your father. The plot twist is more of a plot point that’s revealed, and it’s so harmless to the experience of seeing No Good Deed that I could talk about it nonchalantly in my plot summary and you would never know the difference. I could think up at least a dozen genuine plot twists in as many minutes that would even improve the existing film. It’s sad that the filmmakers didn’t make the same effort. Shame on you, Sony and Screen Gems, for making a mountain out of this molehill.

No Good Deed is so bad that it might be a hoot to see with certain audiences, especially the kinds that yell back at the screen. To be honest, I shook my head a number of times and cried out soundlessly so as to not disturb the others in the audience. They’re promoting the hashtag #TweetToEscape with the movie, and I bet that many people will use that phrase to talk about their goal of leaving the theater. No Good Deed’s filmmakers trapped me in the dark with Elba and Henson for almost 90 minutes, but it’s now my turn to entrap them within their bad decisions and deceptive attempts at promotion.