An unassuming local adman is recruited to head up the messaging for a referendum vote to determine the fate of Chile’s long-time dictator in the new foreign film, No. 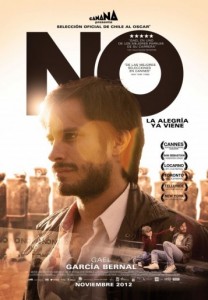 In 1988, under intense worldwide pressure, Chilean dictator General Augusto Pinochet decided to allow his people to vote on whether he should run the country for another eight years. Everyone is certain of how the vote will go but with international eyes on them, the powers decide to put on a show of democracy by allowing both sides to air 15-minute commercials outlining their respective platforms.

The opposition leaders target a young advertising exec, Rene Saavedra (played by Gael Garcia Bernal), to create the campaign for the “No” vote. Who else would be gutsy (or foolish) enough to risk their future and their safety in a clearly doomed effort? The only problem is, Rene hasn’t gotten the message and sets about to plan a campaign designed to win and to bring about monumental change. His novel approach to the entire affair seems to catch fire (good and bad) almost instantly.

The film is the true story of how events unfolded in Chile in 1988 and is filmed in a manner that tries to invoke the feeling of being there. This is done by filming in non-wide screen using footage that looks like it was shot on equipment much worse than my own phone camera. Everything is grainy, brown and often unsteady.

The effort, unfortunately, doesn’t overcome a dull story and flat delivery. In fact, this film has received glowing reviews elsewhere and skimming over them reminded me of exactly why I bother to post my own reviews. Take, for example, a snippet of a typical review from Roger Ebert‘s own site (written by a guest reviewer) that states, “The colors run, forming RGB shadows and ghosts, blurring everything just enough to remind us that the changes of that era were not only political, but cultural and technological.”

Please. This is a story that should have been more than compelling enough on its own and yet the presentation here fails to engage us with enough details and depth to really put us in Saavedra’s shoes. We barely understand the players involved or his own story. A widescreen, dramatic telling of this story would have been far more intriguing. Instead we get a somewhat bearable story that’s interesting now and again but mainly wastes an otherwise interesting historical event.