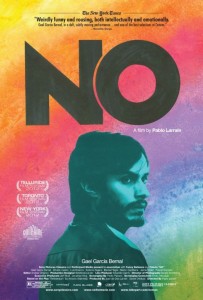 Movies of politics or revolution work best when there’s a unique approach to the topic. If there was ever a different take on protesting the leader in office, it took place in 1988 Chile when Augusto Pinochet tried to appear democratic by putting his leadership to a referendum vote. Little did he know that he opened a can of worms that slimed all over his plans for an easy, fixed vote. No is a step back in time both in subject matter and film quality to explore the ad campaign used to take on Pinochet.

I wanted to wait until after the Oscars to review this film just in case a miracle happened and it beat out Amour for best foreign picture. There was a better chance of me becoming leader of Chile than that happening, but I waited out of respect anyway. Director Pablo Larrain and writer Pedro Peirano adapt the play The Referendum by Antonio Skarmeta, and although it might work well on a stage, I think that this story fits best the type of presentation in this film. A mixture of file footage and new narrative scenes, No speaks to the power of advertising to spur people to action.

Rene Saavedra (a bearded Gael Garcia Bernal despite those razor commercials) is a successful advertising executive who uses flashy graphics, pop music and dancers to sell his products. His boss, Lucho Guzman (Alfredo Castro), advises Rene not to take a contract with the people in opposition to Pinochet who need to fill commercial time on TV for their position. In setting up the referendum vote, Pinochet allowed both sides — dubbed “Yes” for his supporters and “No” for his detractors — to air ads for 15 minutes per day in support of their positions. The vote was clearly skewed toward Pinochet with him paying lip service to his opponents, but the No group never expected Rene to launch a successful campaign. Rene’s ads made people take notice and actually look forward to this advertising window every night on the TV. The only equivalent in our culture of people looking forward to watching ads happens during the Super Bowl.

Larrain went the extra mile in producing this film by also replicating the video quality and presentation of the time. He painstakingly generated film in the format used at the time, which allowed him to seamlessly integrate new scenes with Bernal in file footage of the exact same video quality. To complete the illusion, the resultant film is shown in theaters at the 1.33:1 ratio instead of more familiar widescreen ratios. These video effects tend to transport you back to 1988 more quickly than recognizing that characters don’t carry cell phones everywhere and that videotapes are a clunky method for playing ads for prospective clients.

No blends historical drama, nostalgic details and a powerful message about the influence of advertising and propaganda for a captivating movie. It’s not a surprise that No made the short list of foreign film nominees among a number of strong films this year, many of which just couldn’t be acknowledged because of the volume of foreign entries. The world seems very technologically primitive in No, so imagine how the story would have changed in today’s world of Twitter, Facebook and instantaneous news. In many ways, No feels like Oscar winners Argo or Man on Wire as a look back a few decades when people accomplished amazing things with limited tools and a whole lot of determination. No is an easy vote “yes.”