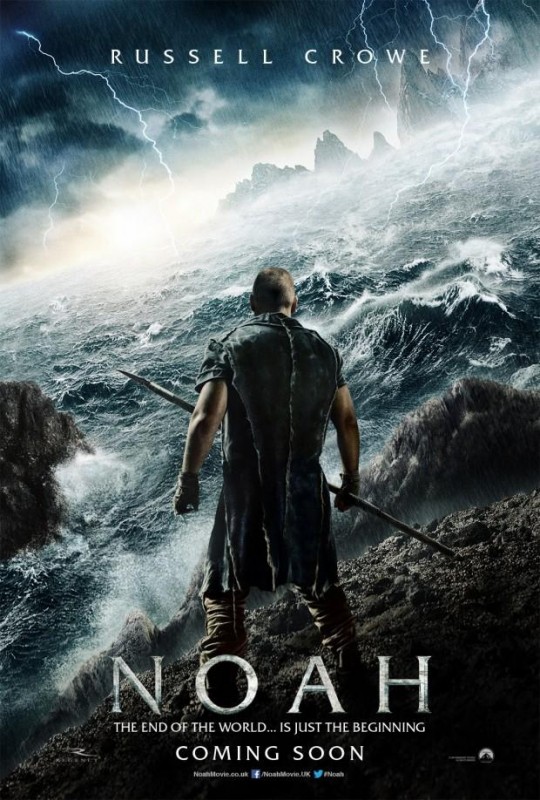 There’s a point in the big battle scene in Noah when the giant rock monsters fight the evil human beings and prevent them from reaching the ark. This scene fits right in with any of the entries in the series of movies based on The Lord of the Rings or The Hobbit. Therein lies the disconnect. Noah tries too hard to please different groups of moviegoers at the same time, and none of the groups gets the filmmaker’s full attention. The Biblical origins don’t prevent its fantastical, magical retelling of the familiar story. Sure to disillusion as many people as it pleases, Noah somehow manages to float above the floodwaters despite its weirdness and unexpected elements.

Noah is the baby of cowriter/director Darren Aronofsky (writer/director of Pi and The Fountain, cowriter/director of Requiem for a Dream and director of The Wrestler and Black Swan). Cowriter Ari Handel previously worked with Aronofsky on the story for The Fountain, so it’s no surprise that Noah has visuals that remind me of that film. It has beautiful scenery and the use of Iceland for many of the scenes shot on location, and it’s hard to tell where visual effects stop and the cinematography from Matthew Libatique begins. Perhaps that’s part of the magic behind Noah. It’s a feast for the eyes as well as the brain and combines what you know about the basic story of the Old Testament character and his iconic ark with a lot of imagined elements for an entirely unique take on old Noah. You know how Batman has so many origin stories and even versions of the character in other time lines and universes? Think of Noah as the exploration of one of these versions of the Biblical hero. Such a divergent view may not sit well with all audiences, as proven by the ban of the film in certain Islamic countries. Still, it’s certain that the faith and courage of the character are evidenced in Noah.

The story of Noah expands beyond the chapters in the Book of Genesis, yet it retains the central conflict of Noah (Russell Crowe) doing what he thinks he’s guided to do, which is to build an ark to save his family and two of each animal on Earth. There’s a lot of backstory added here as the descendants of Cain ruin the world with their technology and cities. Noah’s family includes wife Naameh (Jennifer Connelly, Crowe’s costar from A Beautiful Mind) and sons Shem (Douglas Booth as an adult), Ham (Logan Lerman as an adult) and Japheth (Leo McHugh Carroll). Ila (Emma Watson as an adult) gets absorbed into the family when they find her alive as a child after a massacre, and Noah’s grandfather Methuselah (Anthony Hopkins made to look even older) has some key scenes (i.e., not enough of them). Noah’s family wanders like nomads until Noah is given a mission in a dream to build an ark because a flood will wipe the planet clean. The movie jumps 10 years to the completion of the ark. The evil men of the world are led by a descendant of Cain named Tubal-cain (Ray Winstone), so with a bad guy in the cast, you just know that there are going to be battles and a climactic fight scene. Sure enough, the flood eventually comes, and all of the preparatory scenes with the many characters play to their completion during and after the disaster. The members of the cast get their chance to emote and act up a storm, and that anchors the film despite what flies by. Crowe and Connelly are well matched in intensity and expression by Watson and Winstone, and I can honestly say that there’s not a bad performance in the cast.

Had Noah stuck to an extended version of the classic tale, it would have been a powerful, dramatic film instead of the mixed bag that results. Aronofsky had a unique vision that he wanted to create, and he stuck to his guns. The aforementioned rock monsters are fallen angels known as the Watchers who were trapped in the materials of this planet when they sympathized with flawed human beings. They move slowly, reminiscent of the Ents in The Lord of the Rings, and somehow side with Noah after an initial combative encounter. They’re soon moving equipment for Noah and helping him build the ark. These creatures are really the biggest point of contention for me with the movie because they just seem unnecessary and distracting, especially when one of them plays tag with one of the young boys. Even worse, Nick Nolte and Frank Langella provide voices for two of them. It’s important to note that the Watchers are not in any of the official trailers to date. Other weirdness in the film includes the use of magic by characters with just a touch, glowing elements in the soil that can spark fires and a snakeskin relic that is wrapped around the arm to convey power from generation to generation. You would think that they’d give Watson some powers in this film, but she’s rather normal and certainly wand-less here. 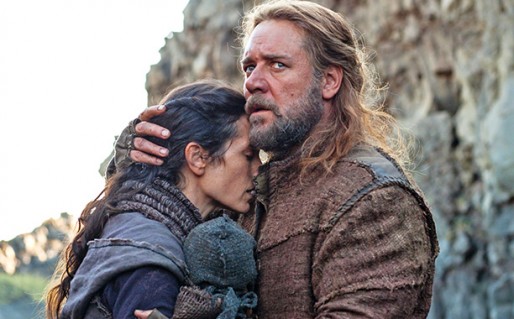 One of the best classes I took in college was a Bible studies class. The instructor was a larger-than-life personality who made every verse come alive and explained with the help of an annotated Bible the meaning and purpose behind most of the books. Noah could never please everyone on a religious level because it veers so differently from the words in Genesis. The Watchers were mentioned in apocryphal books, but they were certainly not rock monsters who talked. What I learned in class was that many of the stories in the Old Testament were written to show the power of God and not to be taken literally. (Fundamentalists would disagree.) Noah takes that approach and doesn’t change certain elements of the story. It’s scientifically unlikely that two of each species could replenish the Earth, yet the movie keeps that in. The dialogue never names God. Instead, the words “the creator” are used when necessary. That’s one of the major problems with Noah. You can’t really have it both ways by making a film about a biblical character that tries hard not to offend religions. Noah gets as close to success in this approach as possible, but it still doesn’t pull it off because the basis of its story is so inherently biblical and not merely faith-based. A disclaimer for the movie in trailers and on the official Web site only further heads into wishy-washy territory. The Ten Commandments is one of the best examples of keeping close to the Bible and still making an entertaining movie.

The special effects in Noah are stunning. I’m impressed when I can’t distinguish real scenery from Iceland and what was created in a computer. Other than some stock shots, there are no real animals in the film. Digital effects permit large quantities of animals, yet I wanted even more interaction with these cohabitants on the ark. The flora had some help from computers as well. The forest that springs up around Noah’s family’s camp is breathtaking, and some montage scenes of water flowing through the land and evolution of species tell a story in seconds where it’s simply not practical to use real locations or animals. The battle and flood scenes are every bit as good as other disaster epics, notably 2012 and the recent Pompeii. Such effects and scenes bring more people to the theaters, and they don’t disappoint. Aronofsky missed a rare opportunity to play around with the Paramount logo and show the ark crashed against its peak.

I have mixed feelings about Noah because it can’t seem to stick to one kind of movie. Even the official posters exhibit that confusion. One has Noah holding an axe, and another has him standing on a rock with the floodwaters around him. Is Noah a sci-fi film, epic drama, action film, special effects disaster flick or all of the above? I was still highly entertained throughout even though the rock monsters went perhaps too far for me. Clint Mansell’s strong score establishes the perfect mood for many scenes, and a nice touch is how the music gets muted when a scene switches underwater before roaring through the speakers once again while surfacing. Noah is Aronofsky’s most ambitious film to date, and although it’s not his best, this big-budget effort certainly contains a lot to embrace as well as question, much like Noah’s mission itself.