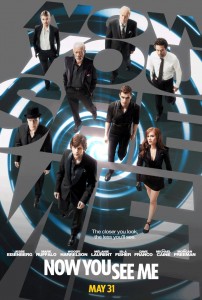 As a huge fan of magic, I couldn’t wait for Now You See Me after I saw the trailer. Here was an attempt to use magic in a heist film to pull off the robberies. If it worked, it would be brilliant. If it failed, it would fail brilliantly. Unfortunately, things are never quite as simple as that. I would love to completely trash the film because of how insulting it is on a number of levels, but I decided to see it again to make sure that my strong first impression was repeated. It was. The problem with a film of this nature is that it’s all about deception in order to impress you with how clever some characters are in pulling off a heist. Without that element of surprise, you just don’t get the same response. Your reaction to Now You See Me depends on both your knowledge of magic, no matter how rudimentary, and whether you buy the elaborate cons even if you ignore the magical aspects. For those reasons, I think a better title is Should You See Me.

The problems with Now You See Me probably originate with the filmmakers. Director Louis Leterrier has done fine work in the past as codirector of The Transporter and director of Unleashed, Transporter 2, The Incredible Hulk (starring Edward Norton) and Clash of the Titans. Is he really the right person for this movie? It makes sense for a car chase on a Manhattan bridge; I’m not sure that the rest of it fits. The writing team of Ed Solomon (writer/director of Levity and cowriter of Imagine That and The In-Laws), Boaz Yakin (writer/director of Safe and cowriter of Prince of Persia: The Sands of Time) and Edward Ricourt have a lot of varied experience to pull off this kind of movie trickery. Although there were consultants for magic, the overall plot may just be too much of a stretch for audiences to believe. For a story that’s supposed to take place entirely in the realms of possibility, it doesn’t pass the smell test.

Now You See Me starts off with a promising sequence by introducing four characters who cover the gamut of modern magic. J. Daniel Atlas (Jesse Eisenberg) excels at sleight of hand with cards and coins. Merritt McKinney (Woody Harrelson) makes his living as a mentalist. Jack Wilder (Dave Franco) is a pickpocket, con man and lock specialist. Henley Reeves (Isla Fisher) performs more elaborate stage tricks like escapes. This quartet of magicians assembles like The Avengers of illusion when summoned by a mysterious character who leaves tarot cards at their performances with invitations to a New York City apartment. A year later, they’re putting on a show at the MGM in Las Vegas as The Four Horsemen. Sponsored by billionaire Arthur Tressler (Michael Caine), they perpetrate a bank robbery from the stage and invite the attention of FBI agent Dylan Rhodes (Mark Ruffalo) and Interpol agent Alma Dray (Mélanie Laurent) as well as the special interest of magic debunker Thaddeus Bradley (Morgan Freeman).

I enjoyed the cast, and they’re the only reason that this movie is entertaining at all. Eisenberg’s characters come off as cocky or smarmy. Daniel fits that mold nicely. Harrelson is at home with the smug Merritt. Dave Franco has many similarities to brother James Franco, but there are enough differences for him to make his own way in the acting world. I’ve liked Fisher in just about all of her movies, so I was surprised to feel that she’s rather flat and dull here. These actors work best in scenes in which their characters are together, either escaping Dylan and Alma or otherwise scheming. Legends Caine and Freeman bring weight to their roles; I just wish that they had more to do in the film. Common and Michael J. Kelly are practically wasted in supporting roles. Better than that, though, is an unusual cameo by Elias Koteas. See if you can spot him.

Heist films rely on whether you go along for the ride and believe the con when it happens as well as its explanation afterwards. Now You See Me’s many cons just don’t work for me on two levels. There’s no reliability on many of the moves, and even worse, there’s no ability to improvise in the tight timing and physical requirements. It’s tough to talk about the plot without revealing its various secrets as well as the holes, so I’ll instead limit my discussion right now about the sloppy writing to a couple of examples. In the first robbery, money rains on the audience for a few minutes. What makes no sense is that the volume of money is about 10 times as great as the money that was actually stolen. Sure, it looks nice on screen, but a film that challenges you to figure out its secrets shouldn’t make such blatant errors. An usher stops Thaddeus from recording the MGM show in the middle of the audience and takes his phone. Thaddeus immediately begins to record with another device. Am I supposed to believe that the same usher wouldn’t see this equally obvious recorder?

If you ignore the silly mistakes like those, you might actually enjoy the movie. Fans of magic will have a much harder time to suspend disbelief. Now You See Me might have had magic consultants, but it cheats in its magic with digital effects, editing and camera tricks to the point that any magician should take their name out of the credits as fast as a burst of flash paper. There are too many examples to explain in a review. The most obvious flaw is the superhuman powers associated with Merritt’s mentalism. He correctly describes his form of magic as a way to read people and perform heightened observation. In the meantime, Merritt puts people into trances and hypnotizes them with a touch or a light jab as if pushing a button. That’s ridiculous, even to real-world mentalists and hypnotists. In the early scenes, both Henley and The Four Horsemen perform with the audience surrounding them. Magicians do not perform in the round because they need to be able to hide people and trick secrets with a curtain. The characters could also not perform the specific feats in these scenes without some switches and maneuvers that require such cover. Digital effects work to the plot’s favor as well. When Henley throws a sheet in the air, it writhes and grows to a larger size before revealing a contraption. Early on, a real magician’s hands in the process of manipulating cards are substituted for Daniel’s. We all know how easy it is to use digital effects. Restraint is just as important.

Now You See Me has a great premise that is lost in the details. Heist movies rely on the contributions and skills of the characters as much as the inventiveness of the con. Building a con with four magicians from different areas of magic is smart. Using cheap movie tricks and editing to present magic in the film is the wrong move. The better approach would have been to do all magic live on camera like a TV special; it would have been so much more impressive that way. Now You See Me may please some audiences, but I doubt it will fool anyone. I’ll use my mentalism skills to suggest that you remove Now You See Me from your movie queue.