Tom Cruise stars as a futuristic maintenance man helping to clean up Earth after a devastating war in Oblivion. 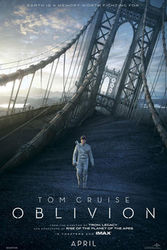 The year’s 2077 and Earth is a vast wasteland of destruction after an alien race attempted to take it over but ultimately failed. The final battle involved the fateful decision to nuke virtually every square inch of the planet driving humanity off its surface and into space for the foreseeable future. Jack Harper (Cruise) is one of just two people on the entire planet. He’s been sent here as a sort of live-action version of WALL-E to help keep all the essential equipment running.  The other inhabitant is Harper’s assistant and lover Victoria Olsen (Andrea Riseborough who also stars in Disconnect). Victoria acts as a sort of director of the day’s operations instructing Harper on his next assignment while he’s off flying about Earth in a very high-tech futuristic helicopter-like vehicle. They both take their orders from Sally (Melissa Leo) who’s back at Mission Control in outer space.

All would be pretty mundane except that some small remnants of the aliens still exist (called Scraps by the humans) and they’re constantly sneaking out of hiding places to steal whatever tech they can get their hands on to keep the fight going even though it all seems quite pointless for them. Helping in this regard are flying, heavily armed robotic orbs that can sense, track and effectively vaporize Scraps with their weaponry.

Harper goes about his repair and upkeep chores dutifully but is haunted by a dream sequence he can’t quite understand. He also seems fascinated by many left-over trinkets of the departed populace. Going much further would expose key plot elements that are best left to be experienced. The previews make it clear that Harper does manage to encounter other humans and one of them is played brilliantly (of course) by Morgan Freeman. Cruise does an admirable job as Harper but the real standout is Riseborough who brings a wonderful aura to her character.

The score is well balanced and hits all the right notes no matter what the scene calls for. The visuals and effects are flat-out stunning. If they weren’t up to snuff then none of this plot would be believable. Thankfully they’re more than up to the task. There is one scene where the visuals feel a bit contrived to drum up game sales. It’s very reminiscent of several films including Star Wars, Top Gun and Independence Day. However, that’s not the only “hey, wait a minute” moment. The producers seem to have little regard for stealing elements from a wide swath of films not limited by genre or decade. Among those that might jump right to mind are Planet Of The Apes, I Am Legend, 2001: A Space Odyssey and even An Affair To Remember.

The biggest issue with the film is that it’s like a flawless recipe that’s just not prepared correctly. The cake’s mixed, tastes great in the bowl but somehow it never quite rises in the oven. I suspect it’s because we never really get enough of the back story and motivations for the key characters to become emotionally invested in any of them. Sally is an enigma we’d love to know more about. Her every look hints at something deeper than we’ll never understand. Jack’s tortured and we don’t find out why until we no longer really care. Couple this with an ending that was patently unsatisfying. I can’t point out why without spoiling the “fun”.

This, quite frankly, is the kind of film that challenges me the most. It’s got all the pieces and you just know it could have been incredible if the producers just decided to go in a slightly different direction. They didn’t so we don’t either and that’s a real shame.