James Franco materializes in the form of the famous wizard in the prequel tale of Oz The Great And Powerful. The story takes us back to the merry old land of Oz to revisit the famous L. Frank Baum characters from The Wizard of Oz. Just about everyone here knows the tale as it’s been a holiday staple for decades going back to the 1950’s (It wasn’t a hit on its initial release in 1939). 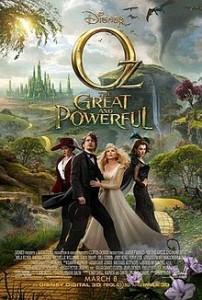 This prequel focuses heavily on the story behind Oscar “Oz” Diggs—a two-bit carny magician from Kansas who, in an attempt to escape an enraged (and brawny) father of one of his many female conquests, jumps into a nearby balloon just as a fateful tornado sweeps into town. The tornado miraculously transports Oz and his balloon into the realm of witches, munchkins and other wonders the like of which he’s never even conceived.

Director Sam Raimi had his hands full with this film. He’s playing with a time-honored classic that brings with it a huge number of fanatical fans who want everything to be just so. Added to this is the technology leap between what was possible in 1939 and today. The potential for distraction seems huge and yet, Raimi seems to have created his own problems here.

The first act of the film invokes the same approach the original took. It’s presented in non-widescreen, black and white until Oscar finally reaches Oz. Then the screen slowly widens in an attempt to wow us with the stunning visuals. The problem is, the visuals are simply far too overstated. Everything vies for your attention at once and it’s just too much. The 3D effects were well done but not all that noteworthy.

There are, of course, many references to the original and some of the elements are well preserved. The yellow brick road seems as if it hasn’t changed a brick and the great Emerald City and castle feel as fresh as if you’d just visited them.

The biggest problem with the story comes down to the characters themselves. We get Mila Kunis as Theodora (one of the witches), Rachel Weisz as Evanora (another of the witches) and Michelle Williams as both Annie (Oz’s would-be love in Kansas) and Glinda (the good witch). None of them fare well though Weisz weathers the drought better than the rest.

One of the actresses is initially fine until the very moment she descends into the darkness that’s at the heart of the wicked witch. Raimi clearly wanted to leave no question as to his intent to evoke the very essence of Margaret Hamilton‘s unforgettable original portrayal. Unfortunately this actress looks absolutely nothing like Hamilton and the effect is not only unconvincing but, ultimately, highly distracting.

Williams, as Glinda, spends much of her onscreen time looking overly meek and ineffectual.

Almost without exception the rest of the cast of characters miss the mark. Zach Braff plays Oz’s sidekick both in Kansas and as Finley, a bellhop-dressed flying monkey. There’s also Joey King playing a small china doll character that’s more disturbing than cute. We also get Tony Cox playing diminutive Knuck with virtually the same approach and out-of-place attitude as his naughty elf from Bad Santa. They’re not even in the same league as the Scarecrow, Tin Man and Lion.

Very surprising is the absolutely forgettable score. None of the numbers is interesting and the one song we get from the Munchkins makes you immediately pine for days of old. There’s definitely nothing to challenge the impact of Judy Garland‘s incredible singing in the original.

The wonder and aura that this tale deserves just isn’t present here at all. I’m even further disheartened that this can’t help but taint a movie version of the incredible Wicked musical that’s supposed to be coming out next year. Now the producers of that effort may think twice and pass. Perhaps this, like the original, will grow in stature over the next decade but I just don’t think even the Great And Powerful Oz has that kind of magic up his sleeve.