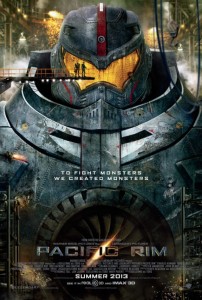 It used to be that the summer’s biggest blockbuster would come out for the Fourth of July. Well, that horse already ran from the stable, so the film that should have received the prestige spot gets the attention this week. Pacific Rim is everything I want in a big-budget, special-effects-heavy movie. It’s exactly what you’d expect would happen if you gave Guillermo del Toro almost $200 million and allowed him to go create something. Part monster movie, part action flick and all fun, Pacific Rim may just be the savior for the midsummer box office following the disappointing Man of Steel and The Lone Ranger.

Pacific Rim emanated from the minds of cowriter/director del Toro and cowriter Travis Beacham (cowriter of Clash of the Titans). At its heart, it’s a simple film about how humanity responds to giant monsters coming from a portal to another world in a rift deep in the Pacific Ocean. The specific defense is to pit a huge robot called a Jaeger, which means “hunter” in German, to fight each monster called a Kaiju, which means “strange beast” in Japanese. In a film that didn’t feel long at all, a rather lengthy prologue in 2020 introduces the first Kaiju that attacks San Francisco and took 6 days to kill. The first Jaegers were primitive, but in all cases, human pilots control the Jaegers from the head and hook up via mind meld or “neural handshake” to each other and the Jaegers such that two pilots and their brains control the Jaegers so as to not blow out the mind of a single pilot. Pacific Rim has elements of so many other sci-fi movies and anime, including RoboCop, Real Steel , the Transformers series, Japanese monster movies, the Godzilla series and Independence Day. Despite the assimilation of these various pieces and influences, Pacific Rim is really its own beast.

The prologue introduces a number of characters, including brothers/pilots Raleigh Becket (Charlie Hunnam) and Yancy Becket (Diego Klattenhoff) of the Gipsy Danger Jaeger. The leadership behind the Jaeger program features Stacker Pentecost (Idris Elba) and Tendo Choi (Clifton Collins Jr.). The Beckets are hot shots who get cocky in a fight with a Kaiju that ends in tragedy. Raleigh leaves the program and goes into construction. Five years later, Raleigh is working on the Wall of Life — a giant coastal wall in Sitka, Alaska, meant to protect the coastline from Kaiju attacks — when Stacker comes looking for him. The attacks are getting more frequent, and Stacker needs all of the pilots he can get for a major stand in Hong Kong. Raleigh gets paired with newcomer Mako Mori (Rinko Kikuchi of Babel), and father/son team Herc Hansen (Max Martini) and Chuck Hansen (Robert Kazinksy) provide the sometimes-friendly, sometimes-adversarial rivalry.

I was impressed with the main cast. Elba, Hunnam, Collins Jr. and Kikuchi have all stood out in secondary roles in the past, and this is their chance to shine. Hunnam was mostly known as the titular character in Nicholas Nickleby and roles in the TV series Undeclared and Sons of Anarchy, so Pacific Rim is his breakout part. Charlie Day as Dr. Newton Geiszler and Burn Gorman (echoing Crispin Glover) as Gottlieb also make their mark as a pair of wacky scientists who determine that they can perhaps figure out how to defeat the Kaiju creatures if they can investigate and meld minds with a Kaiju brain. That sends them to scene stealer Ron Perlman as black market Kaiju parts dealer Hannibal Chau. Perlman actually portrays a human being in Pacific Rim unlike other del Toro flicks. When Perlman walks in wearing his pimp suit and steel designer boots, he owns the movie; it’s no surprise why del Toro goes back to him. 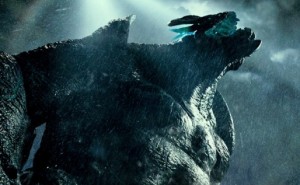 Special effects dominate the screen from start to finish. The monsters are something straight out of H.P. Lovecraft stories, and I only wish there were more scenes with them tearing up cities. Many of the battles take place in open water or other uninteresting backgrounds, but at the point when a Jaeger uses a freighter to smack around a Kaiju on a city street, you know that destruction is on the menu. The scale of the creatures is so large that people have to run around picking up dog-size bugs that must be the parasites that live in Kaiju bodies. The resolution of the film is a bit ridiculous, but you don’t really go to see Pacific Rim for a plot that makes sense, do you? This is a film that makes your jaw drop as you take in the enormous fun on the screen.

I don’t often call out the music because it’s usually atmospheric and almost subliminal as you watch the action or drama. Ramin Djawadi’s score is everything I want in an action or sci-fi movie and more. It’s tense when it needs to be and rousing when the soldiers have their successes. You definitely want to hear this movie with a great sound system. I’ll also go out on a limb here and strongly suggest that you see the film in either an IMAX setting, 3D or — for the best of all experiences — both formats combined. The scale of the monsters and robots is perfect for IMAX, and I found myself feeling like an ant or on top of the world through the 3D effects. Pacific Rim is one of those experiences that are made for modern theaters. You can talk about your home theater until you’re blue in the face, but I’ll take the big screen for films like this anytime. del Toro continues to amaze me with every film, and his vision of creatures and otherworldly things never lets me down.