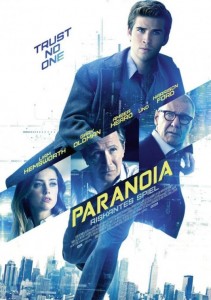 A frustrated tech employee wants his shot at the big time and gets his chance — and all that comes with it — in Paranoia.

Adam Cassidy (Liam Hemsworth) works for one of the biggest mobile companies in the world. The problem is that he’s not content to slowly work his way to the top, hoping against hope that someone will give him the break he needs to shine. He’s intent on making his own destiny and breaking through into the upper echelons of the corporate world. When his bold vision for a new product gets his entire team fired, Adam feels crushed by the responsibility. His final act of loyalty to the team provides the perfect opening for his old boss, tech maverick Nicholas Wyatt (Gary Oldman), to approach Adam with an offer he can’t refuse. Wyatt wants him to go to work for the competition run by Wyatt’s old partner and corporate nemesis Jock Goddard (Harrison Ford). Of course, the idea is for Adam to act as a spy and report back on a new cutting-edge product that Goddard’s company is developing. The challenge is that both companies are steeped in security know-how and technological surveillance of just about everything and everyone.

As the story unfolds, it develops into something a bit unanticipated from the title. We expect the lead character to suffer from heavy paranoia but, instead, it’s really a poor choice for a title. Neither Adam nor the heads of either company are paranoid. They’re simply dealing with the realities of their own businesses and what they know is possible. That’s just being aware and prepared — not paranoid. 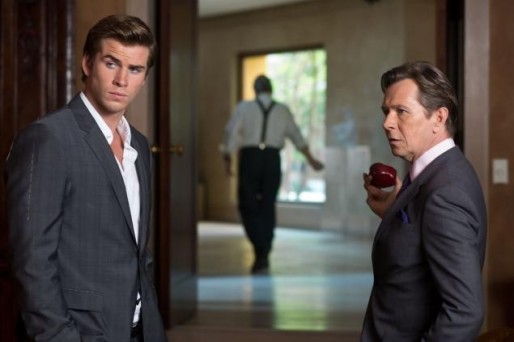 The plot is, frankly, a bit of a mess. Early on, it’s weighed down with enough technobabble to give a hacker pause. Terms fly out in rapid succession, and we all just have to just accept that it made any sense whatsoever. Then, much like every other film that depends on advanced tech as a key component of the story, it overplays its hand. Much of what’s laid out is either simply not possible or outlandishly ridiculous.

There’s nothing wrong with the acting. Ford plays the enigmatic Goddard with ease while Oldman has no harder difficulty playing a vengeful Wyatt. The beautiful Amber Heard, who plays one of Goddard’s top execs and the target of Adam’s affections, also does a great job. The biggest standout is Richard Dreyfuss as Adam’s sickly father. Sadly, it’s a smaller role, but it’s one that reminds us all how good Dreyfuss can be. The movie is best when it focuses on its delicious character interactions. All of them are first rate, but it’s just not enough to overcome the negatives.

The biggest issue with the film is that it lacks any real tension and feels very slow. Even when there’s a chance to ramp up the stress, the director inexplicably cuts the scene short or moves to a sleep-inducing narration. There are also several head-banging moments where you wonder how such tech-savvy people can suddenly forget the very tech they know so well. Finally, it all culminates with an ending that ties everything up far too neatly. Paranoia suffers most from its own delusions of grandeur.