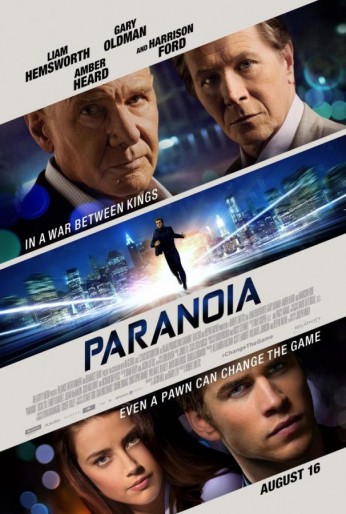 When I think of paranoia, I imagine a nagging feeling that someone is watching me or that something is going to happen or go wrong. You would think that the title Paranoia would lead to a film with someone who’s out of control mentally and afraid of something. Well, that’s not the case with this movie. Paranoia boasts a good cast of heavy hitters and up-and-comers, but it suffers from lack of originality and the use of clichés in both storytelling and technology. Harrison Ford shaved his head for nothing.

Paranoia got its start as a 2004 novel from Joseph Finder of the same name. (1998’s High Crimes was another Finder novel that was turned into a movie.) I don’t know how much of the technology in the movie was in the book — even imagined. I suspect that the novel was updated for today’s world, computers and cell phones. Think of what didn’t exist in 2004, and it’s probably seen all throughout this film. Director Robert Luketic most recently directed Katherine Heigl in the mediocre romantic comedies Killers and The Ugly Truth. It’s more of note that Luketic also directed 21, the adaptation of a popular Ben Mezrich nonfiction book about card counters. About three-quarters through the movie, I realized that Paranoia reminded me so much of 21 — a brilliant, cocky kid gets a taste of the good life and does what he can with the help of other smart people to keep it even if it means going against his own set of standards. Hmm… Writers Jason Hall (writer of Spread) and Barry L. Levy (writer of the good thriller Vantage Point) must take the blame for this script. They should know better than to recycle familiar tropes.

Adam Cassidy (Liam Hemsworth — the actor-brother who’s with Miley Cyrus and doesn’t play Thor) is a hotshot designer who works for the New York City company of billionaire Nicholas Wyatt (Gary Oldman). When Adam talks back to an inattentive Nicholas in a presentation for a new product, he and his team members, including friends Kevin (Lucas Till) and Allison (Angela Sarafayan), get fired. Adam’s father Frank Cassidy (Richard Dreyfuss) has a ton of health problems, so when Nicholas catches Adam in a compromising position, he forces him into some corporate espionage because he needs the money. Nicholas has an old, bitter rivalry with Eikon head Jock Goddard (Ford), and for Adam to make things even, he has to go undercover as a new executive at Eikon. Nicholas’s assistant Dr. Judith Bolton (Embeth Davidtz, also recently in Europa Report) and security guy/enforcer Miles Meechum (Julian McMahon) set up Adam for his mission and require him to check in as he discovers info on Eikon’s newest products. You can’t have a movie about corporate espionage without a love interest to compromise the setup, which means that Amber Heard enters the story as a one-night stand who just happens to be marketing executive Emma Jennings at Eikon. Ugh.

There are so many things wrong with the story and its execution that the film just gets worse as it goes on. Hemsworth delivers awful narration — mostly at the beginning and the end of the film — that will put you to sleep with its tone and lack of interesting content. For someone who is supposed to know technology, I find it hard to believe that Adam gets snookered so much in the story. He works on devices that can track people. Shouldn’t he expect that cameras are recording him everywhere? Big Brother exists. Forgetting the plot points that smell of past bad movies, there are two scenes that have been overdone in thrillers of this sort that both the writers and the director deserve a trip to Ford’s barber’s chair. Adam steals data from Emma’s laptop and puts it on a flash drive, which means that we have to watch the fake tension as the copy process slowly approaches 100%. Even worse, there are doors that are opened with a fingerprint pad. Somehow, some way, Adam gets a perfect fingerprint impression from Emma and uses Silly Putty or some similar material to make a fingerprint layer that he can wear on his thumb. Does it work the first time? Of course not! Let’s ratchet up the tension by making him fail to use the fingerprint sticker-thingy properly. 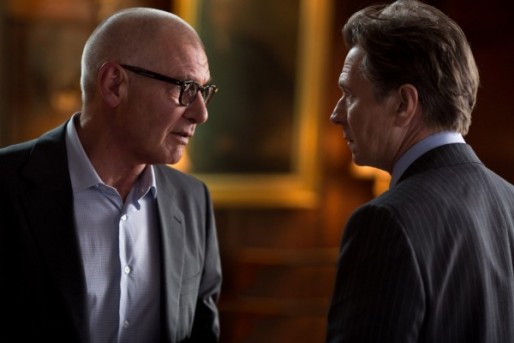 There are a couple of good elements to Paranoia. Oldman does a great job with his character, including a distinct English accent and commanding attitude. Even better, there are some scenes of verbal banter between Oldman and Ford. It’s great to see veteran actors chew up the scenery. Ford’s gravelly-voiced, irritable character might be too close to his role as Branch Rickey in 42, but he at least shaved his head to make it different. I just hope that Ford isn’t entering the ornery Clint Eastwood phase of his career. (Here’s a fun fact: Paranoia was shot in Philadelphia, and only the establishing shots were filmed in New York City.) I never read the Finder novel, and I entered this movie with no expectations. I was insulted with the plot rather quickly, so the only paranoia that took place was my fear that Paranoia would be a long movie or have a sequel.