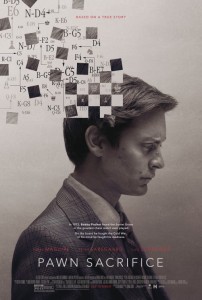 A country trying to win the Cold War turns to an erratic chess prodigy as its would-be champion in the tepid drama Pawn Sacrifice.

You cannot talk about chess history without invoking the name of Bobby Fischer. His famous triumph over then-World Champion Boris Spassky is the kind of story that embodies the phrase “stuff of legend.” Far more than a match between two chess superstars, this was a critical Cold War battle fought between the United States and the Soviet Union.

In this latest retelling, young Fischer (Tobey Maguire) struggles against his own inner demons to become a world champion on his own terms. He’s joined by a patriotic lawyer, Paul Marshall (Michael Stuhlbarg), and an old friend, Father Bill Lombardy (Peter Sarsgaard). The two have the unenviable task of harnessing and controlling the unstable time bomb that is Fischer. Together, they face off against the Russian-dominated chess world, ultimately leading to the legendary matchup with Spassky (Liev Schreiber). 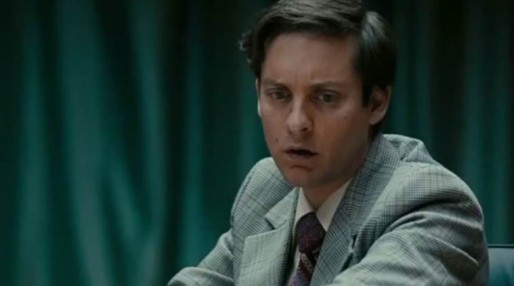 Director Edward Zwick (Defiance and Blood Diamond) knows how to tell a compelling tale. This isn’t quite one of them. It fails in two critical ways. First, it doesn’t give us enough insight into the world of chess to understand its allure or tension. Second, it doesn’t take us deeply enough into Fischer’s psyche to ever get a sense of the man. A quick read of his Wikipedia entry is far more revealing and entertaining. The story builds to what’s widely considered to be the best chess match ever played, but we get little sense of why.

The film tries to avoid the biggest question of what’s wrong with Fischer by barely scratching the surface of three potential possibilities. Such a distant analysis does nothing but make us want the answer all the more. The way the film handles Spassky is also just as lacking. We learn so little about him that he might as well be an entirely fictional creation. Schreiber can only do so much with so little. The same telescoping view is true for Joan Fischer (Lily Rabe), the prodigy’s self-centered, paranoid mother. The lead would have been much better off in the hands of virtually any other actor. Maguire is just too sappy to play a troubled, complex mastermind. It doesn’t help that his accent is nearly as distracting as the large, unnecessary mole plastered onto his nose.

Some might say that chess is a hard subject to turn into a riveting tale. That’s simply not true. 1993’s Searching for Bobby Fischer is exactly that and more. This treatment’s search fails to find the real Fischer.