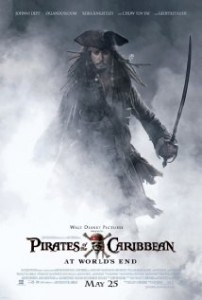 Pirates of the Caribbean: At World’s End fared no better than the other duds I saw this weekend. In fact, I would say I enjoyed Shrek 3 more and if you just read that review that about says it all. The movie was three hours long and that was three hours too long. I found none of it rewarding. The funniest part of the movie was the small monkey and even then, rarely. It was a total mess of a story. We all kept asking each other what the hell was going on. Little of it made any sense. There were too many ships and too many people to keep track of. It also appears that the writers entirely forget that Johnny Depp was the reason for the success of the first movie. He was reduced to being a caricature of his previous performances in the role. No meat at all here. I also am shocked to say that we saw WAY too much of Bill Nighy as Davey Jones. I love this guy in anything he does but I was just worn out with him almost immediately. Yes, the effects were interesting but we’ve been there, done that. The funny part is, I wouldn’t mind revisiting this “franchise” but they need to completely go in a different direction if it continues on. There’s been talk of telling Barbossa’s story but I was sick of him by the end too. My best hope for these movies is that it energize Disney to get off their asses to finally renovate the theme park attractions of the same name. They were novel 35 years ago. Now the attraction just looks that old.

What a bust. For me that’s roughly $100 down the tubes on the trio of trios (tickets for the family and concessions.) It’s $100 I’d rather have back.

It’s amazing to me to think that when we first heard these three movies would be out within 3 weeks of each other in May that it would represent some incredibly amazing movie history and a great lead-in the summer movies. Instead no one is talking in those tones any longer. They’re all making decent money but nowhere near the blockbuster status that was predicted.

The other funny thing is that these movies generally fill you with previews wetting your appetite for a bevy of summer films. Instead, the only preview that looked strangely interesting was for Transformers. The animated movies all look like decent product but without any true stand-outs in the bunch.

So, I still find that the two best movies I’ve seen this year were both foreign (The Lives of Others, Black Book) and thus pretty obscure and unknown. Even the French comedy, The Valet, was more interesting than all three of sequels this weekend.