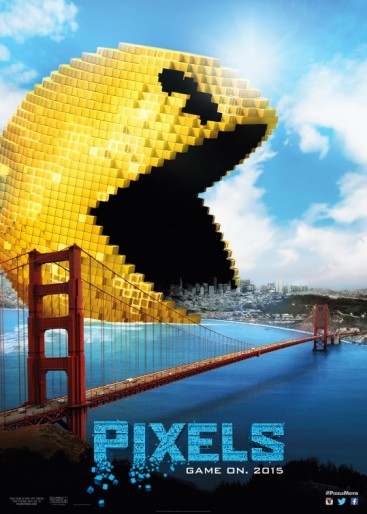 I am from the generation that begged my parents for quarters so that I could run off to the arcade when we went shopping at the mall. Even now, I am still in the habit of paying for items with certain combinations of coins and bills in order to get back quarters. My older brother and I went from 7-Eleven to 7-Eleven to look for the latest arcade games in the early ‘80s, and when he started a vending business and arcades, I was in heaven because I could play all of the latest games for free before anyone else. Pixels should be a movie that I really enjoy because it involves video game culture in a nostalgic way. Unfortunately, it has an identity crisis that prevents it from being any one type of movie, and that results in one big mess. Pixels tries to mix comedy and live video game battles, but it uses up all of its lives and energy long before the finale.

The origin of Pixels is a 2010 short by Patrick Jean of the same name in which three-dimensional versions of arcade game characters attack New York City. (Technically, these characters in both the short and movie are made of voxels — a portmanteau of “volume” and “pixels” — instead of pixels.) This new version also has arcade game characters attacking New York City as well as other major cities around the world and adds a backstory and characters for a fuller approach. Director Chris Columbus has a wide range of credits from comedies like the first two Home Alone movies and Mrs. Doubtfire to fantasy adventures like the first two Harry Potter movies. Given the approach to the subject matter, Columbus is a good pick. Cowriters Tim Herlihy (a writer for Saturday Night Live for many years and writer or cowriter of most of Adam Sandler’s movies) and Timothy Dowling (cowriter of Role Models, Just Go With It and This Means War) have a history in comedies and connections to Sandler. Although I knew that Sandler was a star of Pixels, I had no idea that it was a film from Happy Madison Productions, Sandler’s own company. I cringed when I saw the logo because it brands a title as a certain kind of movie, and everything that I knew about Pixels had it heading in an entirely different direction.

A prologue in 1982 introduces a video game tournament that the main characters attend as well as a time capsule that is sent out into space. In the present day, Sam Brenner (Sandler) installs equipment for the Nerd Brigade, Will Cooper (Kevin James) is the President of the United States, Ludlow Lamonsoff (Josh Gad) is a conspiracy nut and Eddie Plant (Peter Dinklage) is in jail for some white-collar crime. Aliens attack a U.S. base in Guam in the form of Galaga arcade game characters in response to the time capsule that they think was a declaration of war. The aliens talk to us in the form of people like Ronald Reagan or Madonna that they saw in the time capsule and attack various cities with an army of video game characters in a war that’s very much set up like a game. Will and Sam are old buddies, so Will calls in Sam to help defend the country, and Ludlow and Eddie are later added to the team known as the Arcaders. Their video game expertise makes them perfect for defense against the aliens after the Army doesn’t make much progress.

Pixels is very much set up like other Sandler films in that a bunch of guys know each other since childhood and we get a peek at their lives in both time periods. Sandler and James were in both Grown Ups movies. The teen versions of the leads are humorous to watch, whereas the adult versions are more troublesome. Sandler sleepwalks through this role and doesn’t show the least bit of excitement or charisma. I just can’t buy James as the President, but he does make a good buddy to Sandler. Gad is too neurotic here, including a cringe-worthy scene with soldiers. I don’t know what Columbus told Dinklage to do. He sports a mullet, a bad accent and an even worse attitude that reminded anyone in the know of video game champ Billy Mitchell, introduced to most moviegoers in the wonderful documentary The King of Kong: A Fistful of Quarters. The women have even less to do in Pixels. I’ve followed Michelle Monaghan ever since her breakout role in Kiss Kiss Bang Bang. Sadly, she ends up merely as a love interest here, massively outranking Sam as Lt. Col. Violet Van Patten. Jane Krakowski fares even worse as the First Lady, and I can’t recall if she even had any dialogue. 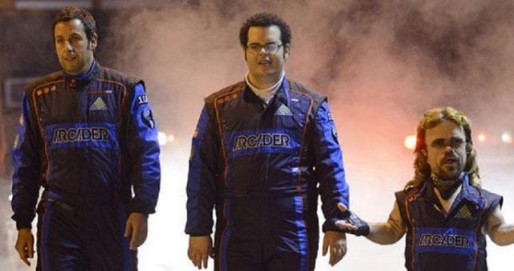 This imbalance between characters is one of many problems with Pixels. It can’t decide whether it wants to be a buddy comedy, a romantic comedy, an action film, a family film, a video game homage or a variation of Independence Day, which it matches most closely in plot. Even worse, there’s humor when it should be serious, and death and destruction are almost treated like they’re part of a game instead of actually happening. Despite the confusion, Pixels is watchable and occasionally fun. The enjoyable repartee between Sam and Violet exhibits their only chemistry. Otherwise, there’s no reason for these two people to have a relationship. Ludlow has a strange obsession with Lady Lisa (Ashley Benson) of the fictional game Dojo Quest. There are more sparks between these two oddly paired persons, one of whom is an alien creation sent to destroy humans, than there is with Sam and Violet.

Columbus at least gets the special effects right, so it’s interesting to watch the battles and alien invasions. As in the original short, objects and people that are attacked by the aliens turn into blocks (voxels) of various sizes. Yes, it doesn’t make any sense for aliens to take on video game formations to attack human beings, but the action is mostly consistent with the source arcade games. When the aliens use Centipede as inspiration for an attack, Sam and the soldiers have to aim their weapons at the advancing beasts in order to not split them in two. This interaction between the video game characters and the Arcaders is the best feature of the movie, especially in the second half. Although I prefer the live version of Pac-Man in the Bud Light Super Bowl 2015 commercial, the scenes with characters driving cars as “ghosts” as they chase a large Pac-Man through the streets of New York City are fun and exciting. One of the posters has a giant Pac-Man munching on San Francisco, and that is purely an artist’s rendering.

Video game fans will love certain elements of Pixels and hate other parts. The scenes in 1982 are mostly accurate. Only players who spent a lot of time in crowded arcades would understand a quick clip of someone putting a quarter on the edge of an arcade machine’s control panel. It meant that you reserved the next game when the current player was done. It’s a nice touch for Q*bert to appear in a bigger role than you might imagine. Arcades were safe and fun hangouts back in the ‘80s, and Pixels captures that feeling, which caused some moments of nostalgia. On the flip side, not all of the video games represented in the attacks by the aliens were available in 1982. The filmmakers took some license with the time frame just to include some characters. An unrealistic scene in the trailer has supposed video game expert Eddie playing two opposite machines at the same time, one with each hand. Even the best of us couldn’t do that. The worst offense to video game fans is a plot point that hinges on someone using cheat codes. You couldn’t use cheat codes in arcade machines in the ‘80s. They didn’t have cheats of that nature, and there were no extra buttons or controls to enter such codes.

I really wish that Pixels had been something different — less like Grown Ups and more like The Last Starfighter. There were only a handful of video games represented. I imagine that it was a licensing thing, but in a few minutes, I could think of a better use of video game characters with just the current batch in the film or others like Dragon’s Lair. I envisioned a video game version of Who Framed Roger Rabbit as far as a world where video game characters from all companies and perhaps eras would coexist. Despite its mostly fictional games, Wreck-It Ralph is a much better video game movie. Instead of seeing Pixels, save your quarters and find an old arcade where you can spend them.