The film comes with lots of adulation and pedigree. It was an official selection at several film festivals and the reviews were about as stellar as they get. In fact, as I write this it’s got a perfect 100% score on Rotten Tomatoes. I’ve spoken many times about my concerns going in for any movie that rates a 90 or above, but the trailer for this was just incredible. 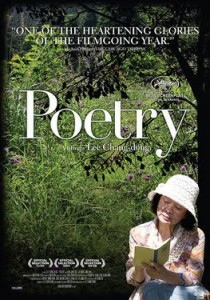 It stars Korean actress Yun Junghee as a mainly retired senior struggling to find meaning in her life. She’s a cultured woman whose best days are behind her and now makes due in a small home that she shares with her grandson. Her daughter has had some rough times and is off making a living in another city. As the movie begins Yun decides to take a poetry class. She’s desperate to express herself in this medium and would love to figure out the magic of the inspiration required to write poetry.

Unfortunately for me that’s pretty much the highlight of the movie. That’s as interesting as it gets. The movie was flat-out the definition of everything I worry about with a film that gets that sort of reception. It may be perfectly shot (it is). It may have great acting (it does). It may be unique (it is), but it’s god-awful boring, tedious and dull, dull, dull, dull, dull. Did I mention it was dull? By the last third of the movie cell phones were lighting up all over the art-house theater with otherwise respectful adults all desperate to check the time. When the film ended everyone groaned with no one bothering to speak while exiting. We were all just spent and nearly in a coma.

Take a look at the poster art. There’s your movie. If you can look at that for 2 hours then this is the film for you. It won’t get much better than that image. Okay, in a different scene it’ll be raining. In another she won’t have a hat. In yet another there will be a bit of dialog, but none of it will be any more interesting than the shot in the poster.

There has to be a way for professional reviewers to comprehend the interest a story will convey. This one has, for example, a five-minute scene of Yun and her grandson hitting a shuttlecock with badminton rackets. That’s it. The film is loaded with these “symbolic” scenes that never seem to convey anything. We also get loads of characters that seem important but that amount to nothing. We never find out what’s up with the daughter. The poetry class doesn’t matter. In the entire movie there was a single scene that had my interest, but it concludes quickly and unceremoniously.

The reviews, after seeing the film, seem as if those viewers saw an entirely different film. The wonder they experienced is nowhere on display, or at least not within grasp of me or any of the rest of the full theater that sat through it.

Right now I’m a bit concerned that, come next February, this may mark the first time when my worst film of the year is rated 100% on Rotten Tomatoes. I can’t even think of a single person to recommend this film to.