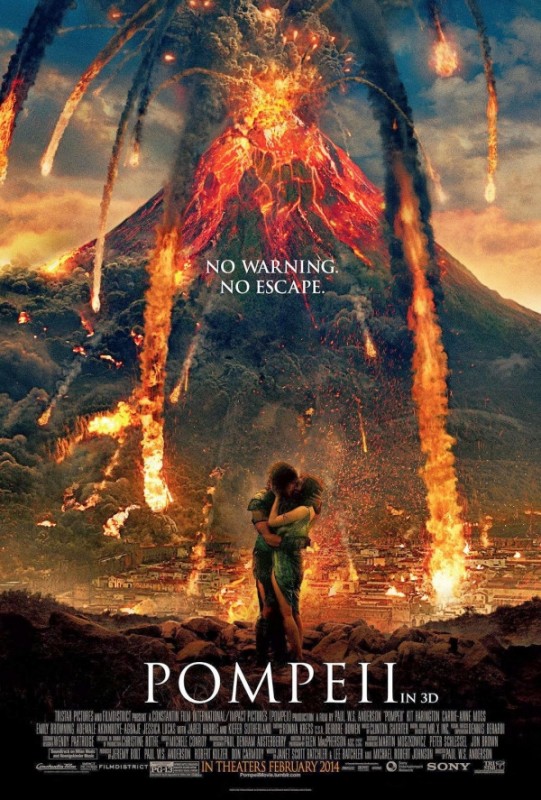 Each year brings minor trends in movies, whether it’s a cluster of films with the same actor — like Benedict Cumberbatch in the last months of 2013 — or a series of flicks based on young adult novels. The spring and summer of 2014 may just include a trend of disaster movies. First up is Pompeii, with Noah and the Godzilla reboot in the coming months. I love a good disaster movie as much as the next guy, but I tend toward the better ones like The Poseidon Adventure and, yes, Titanic than recent fare like 2012 and The Day After Tomorrow. Pompeii has a lot going for it, but it fails in the final execution. Part action film like Gladiator and part love story amid the impending doom like Titanic, Pompeii is watchable but doesn’t completely find its own voice.

Pompeii comes to us via director Paul W.S. Anderson of the Resident Evil series, including the most recent Resident Evil: Retribution and an upcoming sixth entry in 2015. Writers include team Janet Scott Batchler & Lee Batchler (writers of Batman Forever, which doesn’t bode well) and Michael Robert Johnson (cowriter of Sherlock Holmes). Anderson makes his case with a great cast that somehow manages to survive this movie unscathed — with one exception — unlike their characters. Milo (Kit Harington of Game of Thrones) is a Celt who witnessed as a child the slaughter of his people by Romans led by Corvus (Kiefer Sutherland) and Proculus (Sasha Roiz of Grimm). Years later in 79 AD, Milo is a successful combatant in the provinces who is brought to Pompeii to fight as a gladiator in the arena. On his way to Pompeii, Milo helps right the carriage of the beautiful Cassia (Emily Browning, rising above the awful Sucker Punch) and her lady-in-waiting Ariadne (Jessica Lucas). Of course, Milo and Cassia make googly eyes at each other, so you just know that they’re going to meet again. When Cassia’s father Severus (Jared Harris) — not Snape — and his wife Aurelia (Carrie-Anne Moss) promise Cassia’s hand in marriage to Corvus on the eve of the gladiator battles, you know that all hell’s about to break loose, even without the rumbling from nearby Mount Vesuvius.

I found myself consciously comparing Pompeii to Gladiator and Titanic all throughout the film, and that’s a bad thing. The aspects of Gladiator are rampant during the first half of the film, even down to the black fellow combatant who becomes an ally with Adewale Akinnuoye-Agbaje of Lost fame as Atticus taking the place of Djimon Hounsou. The setup of the romance between Milo and the unattainable Cassia, who has a domineering betrothed in Corvus, against a natural disaster reminds me so much of the love triangle of Jack (Leonardo DiCaprio), Rose (Kate Winslet) and Cal (Billy Zane) in Titanic. Maybe I’m jaded by all of this borrowing, including music themes from Spartacus: Gods of the Arena and Spartacus: Blood and Sand. Once you get past all of this familiar stuff, Pompeii is surprisingly entertaining, especially in the latter half when everything that can go wrong does. Anderson’s wife, Milla Jovovich, doesn’t appear in this film, which is disappointing because she would have been perfect for the role of Aurelia or another prominent female role with her classic looks.

Pompeii would be nothing without the expected eruption of Vesuvius and the complete destruction of the city. All that I know about the eradication of Pompeii is contained in those bodies forever preserved in volcanic ash and lava. Imagine my surprise when this film goes beyond the expected and includes some other giant special effects scenes like earthquakes, tsunamis and fires. Anderson’s work on the Resident Evil movies perhaps prepared him for this effort, and it shows with all of the kinetic energy of the second half. The effects of the disaster are unpredictable, so at any point, fireballs or floods may bring destruction and death as much as the angry Romans. At this point in the development of special effects, it’s a given that the effects should be seamless. They are here, and you can just sit back and enjoy the ride. The 3D version of the film really doesn’t bring much to the table, so forego the extra fee despite how the ads try to make you feel incomplete unless you experience Pompeii in 3D. The fight scenes are pretty good, and Milo and Atticus make a good team as in any buddy cop movie. 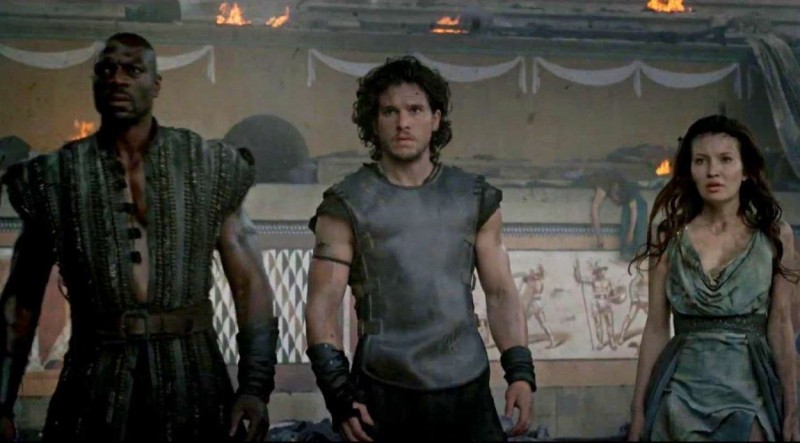 Sutherland has made some bad choices in the years since 24. Touch never got its sea legs, and his performance here is one of his worst. Although I accept the conceit that all actors in films set in ancient times must speak with English accents, Sutherland’s diction and delivery are a distraction. Even worse, I laughed out loud more than once because he walks into scenes with a swish of his cape as if he was the latest actor to portray Liberace. The rest of the cast fares much better, including Harington, whose chiseled abs will get the ladies in a tizzy as they did in my screening. Milo and Cassia really needed more scenes to cement their love than a romantic bareback horse ride, but I understand that time is limited with their world about to end. Pompeii has plenty of things to dislike about it. In the end, I was focused on the special effects and the simple question of whether Milo and Cassia and anyone else would survive the eruption to tell this story to their descendants. For Pompeii, love and lava narrowly beat out bad acting and borrowed plot elements.