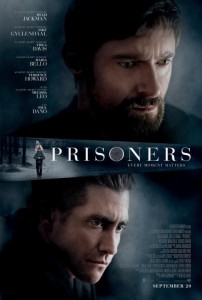 A protective father takes matters into his own hands when he comes to the realization that the police aren’t willing to do what’s necessary to help recover his missing daughter in Prisoners.

Keller Dover (Hugh Jackman) and his wife Grace (Maria Bello) live a typical western Pennsylvania suburban lifestyle. They’re religious, conservative types who enjoy hunting, working hard and protecting their family. They enjoy the company of their good friends and neighbors, the Birches, played by Terrence Howard and Viola Davis. One day, with the older siblings keeping an eye on the younger kids, the children are out walking when they encounter a strange RV parked down the street. When they realize someone’s in it, they quickly leave it behind. Later that day, the two young daughters vanish without a trace. The only clue is the RV that Keller’s son remembers.

When the frantic parents call the police, the case is given to Detective Loki (Jake Gyllenhaal), who — we’re told — is one of the best cops around. They very quickly locate the suspicious RV at a rest stop, and when they surround it, the driver attempts to flee, only to run into a tree. Loki finds Alex Jones (Paul Dano) hiding inside, and he’s clearly missing a few gears. Jones, acting highly curious, claims to know nothing about the crime and is dragged into custody.

From this point on, the story proceeds about the way you’d expect. Jones isn’t talking. The police have to release him, and with the clock ticking, Keller Dover is a man possessed.

This is a film that knows exactly how to play the viewer. It’s filled with exceptionally gifted actors and a plot that anyone, most notably parents, can connect with. It very likely will cause you to ask some very hard questions with respect to your own ethics. The actors give performances that convey a depth of genuine emotions that give the story its tension. However, beyond that it’s a film that’s simply thinks it’s much smarter than it is. Worse, it uses every cheap trick in the book to mislead, distract and confound the audience at every turn.

Anyone paying even the slightest bit of attention will find a litany of plot holes big enough to hide the entire town in. First, there’s Loki. For a detective who’s supposed to be a master of details, he fails to see evidence right in front of him. Then there’s his boss. This is a police chief whose only job seems to be to do everything possible to get in the way. There’s also a subplot involving a priest that’s just outrageously over-the-top lucky. Then, for a movie that’s well over two hours long, a key scene involving one of the daughters is resolved in moments, ignoring any semblance of explanation.

Prisoners has everything going for it but the plot. It’s tense, beautifully acted, beautifully shot and absolutely, mind-numbingly stupid. This is one of the best bad films of recent memory.