I managed to catch the highly-anticipated Prometheus from Ridley Scott. This is, essentially, the prequel to his smash hit Alien. Scott has been a challenge for me. Much of his biggest films I’ve found lacking heavily—most often with regard to entirely silly plot points that flat-out make no sense. Thus, I tend to wait to see his films. Friends asked to see this so I went along. 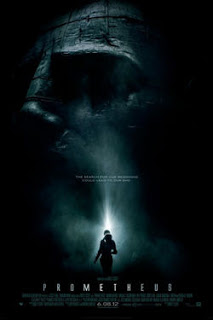 From the very first scenes I was mesmerized. The film built up a treasure trove of potential as it moved along. The visuals were absolutely jaw-dropping. In fact, I can’t think of a better looking film. I didn’t see this in 3D but now wish I had—though it didn’t hurt my perspective I suspect. I started thinking that Scott has given us this generation’s 2001: A Space Odyssey. I then read that this feeling was very much manufactured by the director from the start as he noted a heavy influence from that film as inspiration.

The ride was taking me up the anticipatory hill of a top roller coaster (including a perfectly-matched soundtrack to drive up the experience) and then we hit the drop only to find it fall entirely flat once the plot started destroying the effort. The holes are classic Scott. You could drive …… space ships through most of them. Here we are in humanity’s future and yet they don’t seem to have basic video recording capabilities. A decent percentage of the populace has also contracted some sort of stupidity disease.

My favorite part of the film was the end when one guy clapped and no one in the packed house joined him. Oops.

There’s also a few horrible casting choices. The worst is the male actor playing the lead engineer. He’s entirely invisible in the role. I’m not even going to bother mentioning his name. The other two bad surprises are the inclusion of Charlize Theron and Guy Pearce. Why either of them are in this film is entirely a mystery unless they really need the money. Both are totally wasted here.

There are some bright spots. Michael Fassbender as David the “robot” is excellent as is Noomi Rapace who’s better than ever. Oddly she reminded me, many times throughout the film, of a young Cher. I’ll be glad to see her in just about anything I suspect. She totally outshines Theron.

There’s one scene I have to point out with regard to just how ludicrous the plot can get so mild spoiler alert here. Theron’s character is a bit of a hypochondriac. She’s afraid of any calamity that might befall her that could be dealt with up front. To this point Rapace’s character notices a device in Theron’s room that’s apparently some sort of emergency robotic surgery center (it looks like a futuristic iron lung—climb inside and it’ll fix anything). She asks about it and Theron explains that she’s got it in case she needs something like by-pass surgery (uh, okay…) So later, when a female cast member desperately needs it, the device informs the character that it’s actually designed for a male. What? OCD-laden Theron is so obsessed with protecting herself and yet overlooked the most basic element of this obviously expensive piece of equipment? If you say so.

In the end I liked the film despite itself and I’ll likely enjoy it here and there on cable but will always be critical of its Scott-ism’s with regard to the script. Someone needs to excise George Lucas out of this guy before all hope is lost—or another film is made.