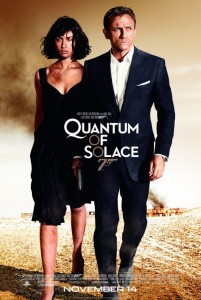 We saw the new James Bond movie, Quantum of Solace, on Friday. The last film, Casino Royale, re-invigorated the James Bond franchise and gave us a surprisingly strong Bond in Daniel Craig.

This film is a complete mystery to me. In almost every area that Casino succeeded, this incarnation fails. The open credits are dull. The new Bond song is a rap song and it’s entirely forgettable and looked to give the artists responsible for the credits major headaches trying to sync it to their animations.

Once the movie started things didn’t improve. The story is extremely thin, flat and dull. For a short movie it felt long. The action dominates and it’s far too frenetic. Much of the action is shot in a way that you’re not sure what’s going on. The effects look cheesy and shoddily done. Some of the scenes are complete rip-offs from earlier films (some Bond, some not) and these fail too. There’s one scene showing one of Bond’s conquests dead in bed while covered entirely in petroleum that was done far better in Goldfinger.

Other elements that I like in Bond films are totally missing. They still can’t seem to figure out what to do with Bond’s martinis and his dialog is just not what you expect from this character. Where Bond has been measured and logical this one is brooding and emotional. The cutting humor was entirely excised. It feels to me like the creators were so concerned about keeping the character alive and in line with current films that they’ve essentially cut everything that we love about the character out.

This is the first film that has no Ian Fleming touch in it and it shows—heavily so. The only positive I can point to is that some of the later Bond movies turned the main antagonist into a goofy comic book character with some unnecessary flaw—often physical. Casino avoided this for the better. Its main antagonist was effective in his own right on the merits of his actions and his acting without the need for some ridiculous defect. Yes, his eye bled but that was minor. This film followed that lead but picked a villain we could barely believe in. He seemed small, acted small and came across small.

There’s nothing in this movie I can recommend. Even the Bond women come across as Bond-lite. When even that fails then it’s time to re-think the path you’re on with this stuff. You had us with Casino Royale and you can have us again but please get back on track with whom Bond is and what made this character work.