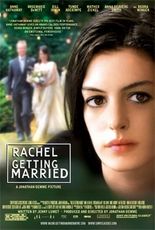 The first movie of the week is Rachel Getting Married. The film stars Anne Hathaway as Kim, a troubled young woman returning home from some sort of incarceration just in time to experience the chaos of planning and preparation going on there for her sister Rachel’s wedding the following day. Rachel is played wonderfully by Rosemarie DeWitt.

The movie is shot as if a camera were hidden in the room simply recording everything that happens—good and bad or, as is the case here, boring or not (more the former). Most things in life are not good fodder for a movie and I contend that this is why Hollywood embellishes everything so much. This is the perfect example of why we don’t just record everything and call it a movie. It’s what I refer to as a “slice of life” film and they almost always turn out to be a total bore — like looking at your neighbors vacation photos for two hours.

We get one scene that runs for 10 minutes that focuses almost exclusively on a fully-realized, fully-detailed “race” between the father of the bride and the groom-to-be over who can fill the dishwasher better. I’m not joking. The entire scene exists to spend 10 seconds on the closing shot to tell us something we all already gathered. Other scenes drag on like this seemingly forever. The wedding reception shows what feels like every song the band plays, in real time, and we see various characters dancing for the entirety of the songs. When the scene does change it changes to another song and more people dancing. Once in a great while we see a shot of Kim looking despondent.

In all there are perhaps two or three scenes of any real merit in the entire movie. It just wasn’t worth the hassle to get to the meat here. It was like driving all day to get to a buffet that only offers one option. As a result I will have absolutely no interest in, of course, Rachel Getting Divorced if any such film ever gets made.