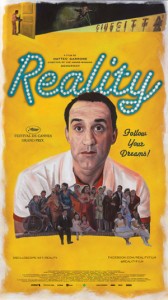 Every now and then, it’s nice to have a sunny movie in which a main character is blind to the reality of his life and just sticks to his dreams. There’s nothing wrong with a little intentional avoidance of the real life to strive for the imagined life. This Felliniesque mix of dreams and reality — with the emphasis clearly on the latter — is the basis for the newest Italian import named Reality. It has its ups and downs as well as many wacky situations that might test the most patient of viewers. Still, Reality is inspiring, funny, heartwarming and moving.

The real surprise about Reality is that it comes from the same director (Matteo Garrone) and writing team (Garrone, Massimo Gaudioso, Maurizio Braucci and Ugo Chitli) as violent crime drama Gomorrah. That film was such a huge international hit, so the next logical step is to make a light comedy merged with a slice-of-life film about a dreamer, right? The working title of the film in Italy was Big House or Il Grande Fratello (Big Brother) depending on what you read. Reality is a much better title given the different layers although any of them would apply. On the most basic level, Reality is about fishmonger Luciano (Aniello Arena) and his obsession with the TV show Big Brother. Who knew that this show had such an international following?! Evidently, the show is huge in Italy to the point where people come from all over to try out for the show. Sure, let the world watch you live for 24 hours a day for as many days as you can last in the house. That’s a good way to establish a normal life.

Fortunately, Luciano has nothing like a normal life, so an escape to a reality show would be a blessing. Luciano runs scams on the side with his patient wife Maria (Loredana Simioli). Lately, they sell food robots that create all kinds of interesting dishes, and part of their effort is getting people to pay them for the robots after they try to hide the fact that they even received them. Luciano works closely with good friend Michele (Nando Paone), and everyone in his extended family seems to be a huge fan of Big Brother. They gather around the TV every night in their Naples neighborhood to watch the antics of its “stars” on TV. These family members include Aunt Nunzia (Nunzia Schiano), Aunt Rosaria (Rosaria Durso) and cousin Giusy (Giuseppina Cervizzi).

So much in the film depends on Luciano’s quest to get on Big Brother. Luciano has a strange fondness for previous Big Brother contestant Enzo (Raffaele Ferrante), who makes an appearance at a wedding attended by Luciano and his family at the beginning of the film. Luciano tracks down Enzo at another wedding at the caterer’s facility to take a picture with his daughter and Enzo. Luciano shows up late for the local Big Brother auditions for the next season but manages to convince the producers to see him anyway because his daughter is crying that they’re too late. Even worse, Luciano completely changes his behavior and starts to act like a star when the producers call him to Rome’s Cinecitta Studios for the next level of tryouts. It’s sad to watch Luciano strive so hard and throw everything away to get on this show when you know deep down that it’s not going to work out. Maybe that’s the true reality of the title.

Garrone is an expert at capturing the details of life to the point where others looking in on these characters find them comical. These people are animated and warm, so to watch them worship another version of reality when their own is so rich and colorful is a bit melancholy. The acting is so genuine and organic that I find it hard to tell when the script stops and the real personalities behind the characters begin. It can’t be an accident that many secondary characters share their names with the actors who inhabit them. There’s an interesting story behind the casting of Arena in his first film role, too. You would never believe that Arena had never appeared on film before. His background added another level of reality that’s interesting to the production of this film. Arena is a gangster convicted of committing three murders in 1991, and he is currently serving a life sentence. He was spotted in a prison theater workshop, and he received special leave to film Reality as long as he was back in the prison every night. Perhaps Luciano’s yearning for an extra dimension to his life is equivalent to Arena’s desire to be free. Regardless of the motivation, Arena pours his heart and soul into Luciano.

Music is essential to movies, but I don’t often comment on it unless it actually stands out. The wonderful score by Alexandre Desplat enhances the emotions of Reality as it tugs at your heart. The music becomes more integral as the film progresses and leaves you wistful after the final scenes that are open to interpretation. Garrone and his writing crew made a tonal shift from Gomorrah to Reality, and they still managed to retain the feeling of authenticity and believable characters. I wouldn’t call these films a resurgence of Italian cinema, but Garrone’s films will likely continue to garner attention and captivate audiences. Reality is a solidly good film, but it still lacked something that would take it to the next level for me.