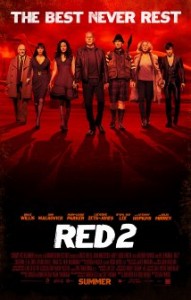 The team from the surprise action/comedy hit of 2010 is back in action with the all-new sequel RED 2.

Bruce Willis and John Malkovich are back, starring as retired CIA black-ops agents Frank Moses and Marvin Boggs respecitvely. Frank’s settled down into a rather mundane existence as the live-in boyfriend of Sarah Ross (Mary-Louise Parker) when Marvin shows up to warn Frank about a new danger. It seems that they’re being unfairly linked to a Cold War-era project involving a nuclear bomb that’s set to go off in Russia. This pulls everyone off into a new multitiered mission of international intrigue and adrenaline-pumping action across several continents.

Tasked to bring them down are the best agents available. There’s their old partner Victoria (Helen Mirren), who’s now been hired to kill Frank but whose true loyalties no one can be sure of. Then there’s also the the world’s top assassin, Han (Byung-hun Lee), who also has an old score to settle with Frank. Also in the mix is Frank’s old flame and top Russian agent Katja (Catherine Zeta-Jones), who seems intent on revisiting the relationship while procuring the bomb.

The plot steers them to Edward Bradley (Anthony Hopkins), a criminally insane prisoner initially involved with the bomb who the government’s had locked up for 32 years. 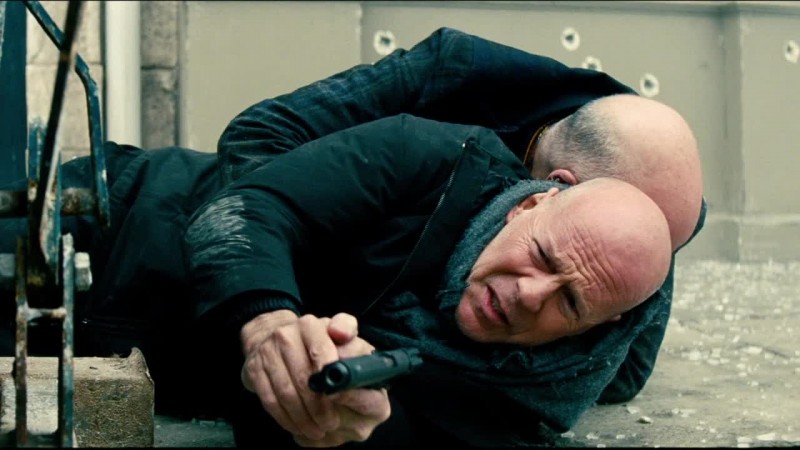 The first film came out of nowhere with immediately electrifying effects, killer dialogue and a pretty decent story. The sequel has its moments, and those moments are marvelous. The action sequences are phenomenal with some excellent fight sequences and, of course, more firepower than a small army. The jokes are often laugh-out-loud funny, and the score, at times, seems to be directly injected into your senses, transforming you into a metalhead on speed. The film also does what the first installment neglected to do, and that’s to make the connection to its comic book roots via some well-done animated transitions that evoke comic book panels.

Unfortunately, the overall effort is highly uneven. The story is a circuitous mess that jumps all over and then seemingly back to the start, completing the loop more than once. It’s probably best to just ignore it if that’s possible.

Frank and Victoria come off solidly, but the writers seemed entirely at a loss when it came to Marvin and Sarah. Marvin isn’t half as funny or cutting as before, and Sarah is pretty much reduced to a one-trick pony. Lee, as Han, does a really nice job, and Hopkins, of course, nearly steals the show. The real surprise is the head-scratching casting of Zeta-Jones as a Russian agent who doesn’t look at all Russian and who seems to only consider a Russian accent as an afterthought. Perhaps her comic book character is just like Zeta-Jones, but the script never suggests as much.

What we’re left with is a typical sequel to a much stronger first effort. Just like the sexiest and most powerful sports cars in the film, it’s full of unadulterated horsepower but stuck on a winding course that often limits it to pedestrian speeds.