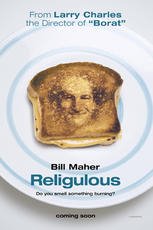 The second movie of the week is Bill Maher‘s Religulous. Maher has made a career out of questioning religion in all forms and Religulous is his attempt to bring that question to the masses.

This one is pretty much as I expected. I’m a big fan of Maher but he tends to rant on some subjects and loses sight of the bigger picture along the way. This movie is no different. He takes aim at just about every religion and feels it’s okay to stop questioning after simply ridiculing whoever he happens to be talking with.

This had the chance to be something special but Maher just isn’t a skilled filmmaker. There are some nicely funny moments and some enlightening ones as well but it’s all no more than skin deep. He’s done a much better job of making his point on the subject during his own HBO show or in various stand-up routines.

In the end the movie just comes up flat. He doesn’t manage to really convert anyone with his approach and just spends the entire time basically showing how not to produce a compelling documentary.