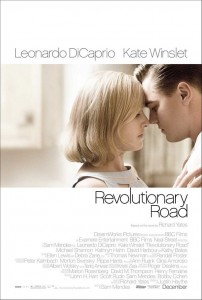 This weekend I managed to sneak in two more 2008 movies even though the latter one was officially released on December 31st.

The first movie is Revolutionary Road starring Kate Winslet and Leonardo DiCaprio in their first pairing since the titanic Titanic. This is a story very much about the era that encompassed the 1950s. April (Winslet) meets Frank (DiCaprio) at a party and, like most Hollywood movies of the era, they fall for one another and end up married. Now several years later they’re living in a dream house with beautiful children in a neighborhood right out of a Normal Rockwell painting.

The problem is that this is not a 1950s movie. Here we get the “real” story behind the story. April is suffocating and Frank long ago gave up the dreams of youth leaving them only to be going through the motions like everyone else. There’s a wonderful line in the movie that goes something like this, “You never forget the truth. You just get better at lying.” That is the undercurrent, and a strong one, of this entire movie.

The entire effort is worth the investment. It took just a bit to get going but when it does it does so without ever looking back and neither will you. You’ll wish for things to be different because you know either yourself or someone else who has found themselves in this situation or can very much imagine it. The acting is first-rate across the board and the look of the film is flawless.

Preconceived Notions:
Will it just be a great job from Winslet with nothing else to enjoy?

During The Movie:
Where is this going? Oh! Couldn’t they pick someone else besides Kathy Bates to play that role? We don’t need anymore Titanic reminders.

Immediate Afterthoughts:
Excellent movie. Might be a bit slow for many but it’s deadly accurate and feels it.