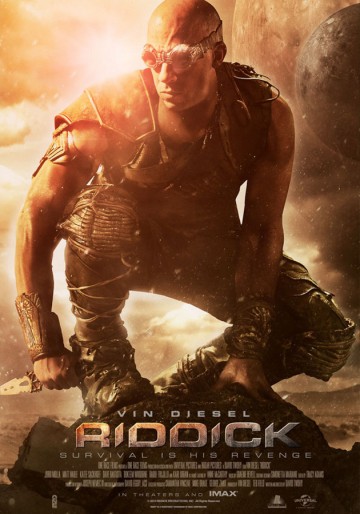 Vin Diesel first entered the consciousness of moviegoers with Pitch Black (2000) and The Fast and the Furious a year later even though he had small roles in Saving Private Ryan and Boiler Room. Diesel knows how to give back to his fans and doesn’t snub his nose at the movies that propelled him to stardom. That may be why this summer has featured both Fast & Furious 6 and, now, Riddick. I liked Riddick, but I’m concerned that moviegoers may pass on this one because a) they already saw Diesel earlier this summer, b) the trailer calls to mind the other entries in the series or c) this is the time of the year when studios dump their leftovers into theaters before the wave of Oscar nominees. Those are all valid arguments. Riddick really cries out for a trip to a theater even though I wouldn’t classify it as a blockbuster. Love or leave Diesel, Riddick boasts some amazing special effects and complicated mixtures with live action to create a dangerous, barren planet and stage a compelling survival story.

Riddick may look and feel like the previous films because writer/director David Twohy is back again. His involvement — as well as Diesel’s — keeps the film both fresh and familiar. This isn’t a lazy movie by any means. There are references to previous films, but it’s not necessary to make the connection to enjoy this one. Richard B. Riddick (Diesel) is stranded on a planet and left for dead. Of course, he’s hardier than that. He figures out how to survive the beasties that surround him and then makes his way to an abandoned base where he activates a beacon to call in a ride off the planet. Two crews of mercenaries arrive to fight for the ample bounty on his head — double if he’s dead — and the plot takes a twist into something else entirely. Riddick is really two movies in one, and I liked both of them. The first part establishes Riddick’s survival skills and introduces a number of the planet’s dangers from creatures to pools of caustic liquid. The second half feels a lot like both Alien and Aliens with Riddick taking the part of the dangerous titular creature of the first of those two movies and the bounty hunters along with Riddick overcoming incredible odds against waves of creatures as in Aliens. Ironically, Riddick’s ability to see in the dark doesn’t feature critically in the plot; it’s a sense he uses just like hearing or smelling.

You already know what you’re going to get with Diesel as Riddick or any of his characters — his deep voice and cocky attitude. In Riddick, Diesel provides the narration, too, which is sometimes humorous and/or self-effacing. In the early part of the movie, the landscape is predominantly yellow and rocky. There are three types of creatures: ravenous zebra-striped dingoes/dogs/hyenas, flying buzzard-like reptiles and deadly scorpion-like beasts with big teeth and poisonous pincers. Riddick finds a way to deal with all of them before he hits the button to turn on the beacon. The dynamic shifts when the mercenaries arrive. They’re in conflict with each other over who gets the bounty, and when both a storm and creatures threaten the installation, they suddenly have to side with Riddick to take advantage of his skills in order to survive. I enjoyed the flow of the film and went along for the ride despite the shifts in tone because Diesel and the strong cast kept me involved.

The cast of Riddick is really just Riddick and a number of character stereotypes. Despite that oversimplification, the casting is quite perfect. The first group of bounty hunters is a scrappy little group of Hispanics led by Santana (Jordi Mollà), a smarmy guy whose bark is definitely worse than his bite. Diaz (WWE star Dave Bautista) is Santana’s muscle, and Luna (Nolan Gerard Funk) clasps his Bible like it’s going to keep him safe. The second crew to arrive feels a lot like the space Marines from Aliens, which led to my comparison. They have similar armor and are much bigger badasses than Santana’s crew. In fact, they provide the only possible challenge to Riddick. Boss Johns (Matt Nable) is quiet but explodes when necessary. Moss (Bokeem Woodbine) and Lockspur (Raoul Trujillo) are talented soldiers who step back and observe before diving in when necessary. I was most impressed by Katee Sackhoff as Dahl, the lone woman on the planet. (Well, Santana has a prisoner played by Keri Lynn Hilson, but she surprisingly doesn’t have much screen time.) Dahl stands up to any man who thinks that he can take advantage of her, and she’s beautiful to boot. Sackhoff completely owns that character, and it’s no surprise given her role in the modern Battlestar Galactica and voice-over work as a female Marine in Halo 3. Karl Urban returns to this series in a brief flashback as Vaako; I suspect that he’ll return in a future movie.

I was blown away by the special effects in Riddick. Sure, there are speeder bikes straight out of other sci-fi movies, and Riddick’s eyes are made milky white at times. That’s the simple stuff. As far as I can tell, none of the creatures are models or even filmed with a live animal on set that’s covered with green material. That doesn’t make them any less real with Riddick splashing around in the water with the scorpion creatures and sharing scenes with some of those dingoes/dogs/hyenas that are downright scary. The outdoor scenes on the planet are amazing efforts of filmmaking. I believed that they were on an alien planet with dangers in both geography and inhabitants. It was probably just a soundstage that was decorated by excellent production designers. I don’t really care. I liked the look and feel of the movie and the seamless blending with the actors, including many scenes in the rain. Many hackneyed flicks spray some rocks with various textures or stage scenes in a picturesque canyon. I think of some of those alien world scenes in the original Star Trek TV series. Riddick gets it all right and creates an environment that’s dangerous to both Riddick and the other characters.

You would think that I would give Riddick a better rating with all of this glowing praise. I really don’t have any complaints, either. Even the music from Graeme Revell is moody and fitting. I just can’t rank Riddick any higher because it feels like such a small movie. I expected the story to leave the planet after 15 minutes rather than stick around. Once I realized that Riddick wasn’t going anywhere fast, I thought that Twohy and Diesel are probably saving all of the really great stuff for the next movie. If they manage to maintain the special effects, casting and story and make a bigger movie, I’ll gladly listen to Diesel’s monotone as Riddick once again.