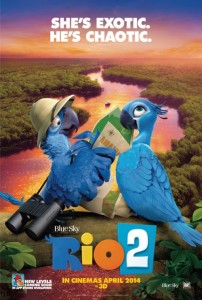 A mismatched pair of blue macaws return for adventure in the Amazon with their new family in tow in the animated sequel Rio 2.

When last we saw Blu (voiced by Jesse Eisenberg) and Jewel (Anne Hathaway), they were together and safe in their brand-new bird sanctuary in the jungles of Rio de Janeiro. With a young family of three offspring, the birds now set out to find their human companions, Linda (Leslie Mann) and Tulio (Rodrigo Santoro), after they go missing in the Amazon.

Once there, they’re amazed to find Jewel’s long-lost family, including her grizzled, soldier-like father Eduardo (Andy Garcia). The family and the rest of the clan have survived all this time in a spectacular remote area of the jungle. Eduardo, having lived a life always on guard, can’t fathom what his daughter sees in the skittish, dove-like Blu and makes his displeasure quite apparent.

Meanwhile, Blu’s original nemesis, Nigel the cockatoo (Jemaine Clement), is determined to exact revenge from Blu for his fall from grace in Rio. To aid in his task, he enlists the help of an infatuated female frog, Gabi (Kristin Chenoweth), and a silent but curiously adroit anteater named Charlie. The rest of the original animal cast also finds their way into the story by journey’s end.

Much like the original, the sequel is a visually stunning film. The vistas of Rio were already impressive. This bird’s-eye view benefits from the even more colorful and expansive Amazon rain forest. It’s also the perfect setting for the panicky Blu to go entirely off his course. It’s loaded with countless dangers and challenges the likes of which Blu couldn’t even imagine in his worst nightmares. 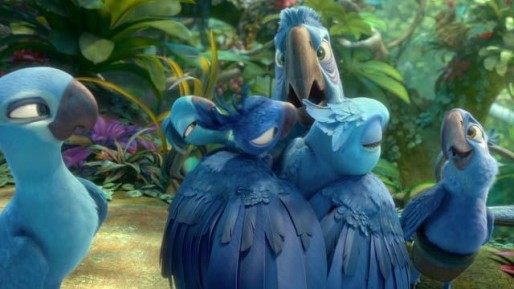 The star of the sequel, however, is the irrepressible Nigel. His egotistic eccentricities light up story every time he’s on screen. The other notable character is Gabi, the flamboyant frog who nearly steals the show. Her sultry longing for the affections of Nigel culminate in the movie’s best song. Unfortunately, it’s also the movie’s only memorable number.

The heart of the sequel — the plot — is a mess. First, there’s a complete disconnect with the Blu of the original film and this one. The original Blu was raised around humans and their technology. While he did interact with a number of them, he did so in believable, bird-like fashion. Here, he wears a fanny pack and carries a GPS, binoculars, an electric toothbrush and various currency. In one scene, his daughter produces a large book out of nowhere. How it got from Rio to the Amazon is a mystery, but that’s being nit-picky for an animated film. The bigger problem is the lack of a cohesive story line. Instead, we get a potpourri approach to storytelling with no fewer than four main plots. As a result, they’re all far too thin and disjointed to keep us interested.

The youngest viewers in the audience will likely find enough to keep them entertained. Rio 2 is quite beautiful and has wonderfully straightforward characters and some good laughs. For the rest of us, it’s a struggle to stay airborne.