Adaptations from comic books don’t always lead to superhero movies. The comic book industry has enough variety, especially with the independent publishers, to generate gems like The Walking Dead in addition to the latest Spider-Man and Batman titles. The filmmakers behind R.I.P.D. dug deep to unearth this unusual story. Dark Horse Comics released the series that forms the basis for this film back in 1999. R.I.P.D. is buoyed by two standout, offbeat performances and a world in which the rules of physics, death and reality are thrown out the window. This fast-paced flick provides a different sort of sci-fi fun for summer moviegoing audiences, but there may just be too many elements that fail in order for this to adhere to some sort of sci-fi standard.

R.I.P.D. comes from creative people who should have been able to put together a movie that’s better than mediocre. Still, it’s certainly not as awful as many people have reported. Director Robert Schwentke (director of both RED and Flightplan) and writing team Phil Hay & Matt Manfredi (writers of Crazy/Beautiful and cowriters of Clash of the Titans) certainly have experience with action elements and comedy. In adapting the Peter M. Lenkov comic book, the problem may really be with the tone of the film. Zany characters and action-heavy panels work in the confinement of a comic book, but when those same scenes and activities get expanded into a larger setting, they may get lost in the process with any flaws fully exposed.

R.I.P.D. has a very simple story, and with its short running time, there isn’t too much complexity that can happen. It felt like it went by too fast. I would have liked more meat on the bones and some more exploration of the concepts. Boston detective Nick Walker (Ryan Reynolds) has a loving relationship with his beautiful wife Julia (Stephanie Szostak, most recently in Iron Man 3) and a good partnership with detective Bobby Hayes (Kevin Bacon in bad guy mode). Nick and Bobby took some gold they found on a job, and unfortunately, Nick develops a conscience and wants to turn in the gold without ratting out Bobby. Bobby fires a few bullets into Nick in the middle of a drug bust, and Nick is suddenly dead and in some in-between world with its Proctor (Mary-Louise Parker) making him an offer he can’t refuse. Join the R.I.P.D. (Rest in Peace Department) to rid the world of evil souls known as “deados” who are hiding out on Earth in human form, or take a chance with judgment. Nick opts for the R.I.P.D., and he’s paired up with Roy Pulsipher (Jeff Bridges made up like Buffalo Bill) for his 100-year assignment. 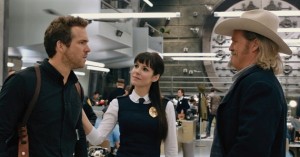 The comedy and special effects save the film because the plot is not much more than Nick and Roy trying to expose Bobby’s murder and taking down deados who are out to destroy the world in the process. Parker is a delight in every scene with her character’s snark and love-hate relationship with Roy. Bridges also tends to dominate the screen, but I just don’t understand why this lawman from American frontier days delivers his Southern accent as if he has marbles in his mouth. One of the best aspects of the movie goes almost entirely unaddressed and should have been mined so much more for comedy. Nick, Roy and other officers of the R.I.P.D. walk around on Earth but don’t look like their former selves. Instead, they take on identities or avatars meant to allow them to blend in. Nick’s avatar is an older Chinese man portrayed by James Hong, famously known for an episode of Seinfeld in which the four main characters endlessly wait for a table in a Chinese restaurant. Roy’s avatar is as over-the-top as he is — a gorgeous woman played by model Marisa Miller. These characters are only visible a few times and could have added so much more fun to the movie.

It’s clear where the considerable budget for this movie went with the large number of special effects sequences and stunts. The drug bust has lots of explosions and the complexity of everything freezing when Nick dies. Later on, there are wormholes to the afterlife and a pretty fantastic finale. You won’t get bored while watching R.I.P.D., but that doesn’t mean it’s really very good. There are elements of Men in Black, Dead Like Me and Reaper in the assignments given to Nick and Roy, and there’s even a little bit of Ghost in the plot as Nick repeatedly tries to contact Julia. The deados are a place where things went off the rails a bit. It might work in a comic book, but the silly, gleefully evil actions and exaggerated features of the deados could make some people shake their heads. Even worse, the voices by people like Mike Judge and others are simply bad. Early in the movie, a famously dead celebrity — or so we thought — is revealed to be a deado hiding out in the form of another human being. As this guy bounds all over the place and spouts insults at Nick and Roy, it might just be too silly or ridiculous for some moviegoers. I understood the humor, so I went along for the ride. These kinds of out-of-this-world characters were handled much better in Men in Black.

All is not totally lost in R.I.P.D. The creative cinematography leads to many scenes that look like they’re right out of comic book panels. In some cases, the characters are at a strange angle — perhaps upside down — and in other scenes, the camera might be placed at street level looking up. The look and feel of the film is fluid, so it’s certainly watchable and fun. Roy’s certain fascination for women may explain Proctor’s white go-go boots, but Parker certainly rocks those boots. Roy sings a song called “The Better Man” while playing a concertina. I cringed at this performance during the film; the version over the credits is better with music by Bridges and T-Bone Burnett. This musical contribution doesn’t explain why Steely Dan plays constantly in the offices of the R.I.P.D., but I guess some mysteries are meant to be unresolved.