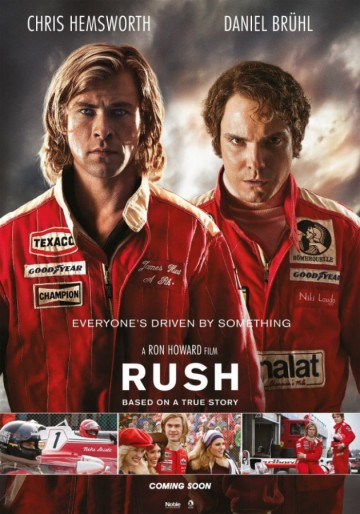 Race car drivers are often overlooked as athletes because many people think that they merely drive around in circles for hours. They don’t realize that racers endure incredible discomfort from the heat and track conditions, experience injuries as a result from strongly holding a jerky steering wheel for hours and deal with the occasional crash. Excitement and glamour go hand in hand with the pain and suffering. Rush mixes the feel of Formula 1 racing in the ‘70s with the real-world rivalry of legendary drivers James Hunt and Niki Lauda. Part drama, part action and always captivating, the film plops the audience right in the middle of the 1976 racing season for a story that shows the determination of its lead characters.

Rush is another collaboration between director Ron Howard and writer Peter Morgan (writer of The Queen and Hereafter), who worked together on another story of rivals in Frost/Nixon. Rush similarly takes a step back to the ‘70s as Howard previously did with great success in Apollo 13. All of the elements are there for a great racing film or sports film if you look back at other films of the same type. I just didn’t find that the movie was big enough to take it to that next level. At its heart, it’s about the relationship between two drivers and their personal experiences with racing and life in general. Vastly different people, the only thing they can agree about is how alive they feel behind the wheel of a race car.

The filmmakers use the technique of starting near the end of their story and jumping back in time six years to show what led up to that day. The focus is on James (Chris Hemsworth) and Niki (Daniel Brühl of Good Bye Lenin! and Inglourious Basterds). I always worry about the accuracy of a film once they use that term “Based on a True Story,” but I’m not so much concerned about this movie because certain facts are well known and a brief cameo of the real Niki Lauda near the end of the movie indicates some sort of cooperation. What does concern me is the lack of character development for just about everyone except James and Niki. Olivia Wilde portrays James’s girlfriend and eventual wife Suzy Miller. She has some good scenes, but this is a typical girlfriend role with some minor distractions for James. Alexandra Maria Lara (Control and The Reader) fares better as Niki’s wife Marlene Lauda because she’s around Niki more and serves as some sort of inspiration. Briefly, Pierfrancesco Favino appears as driver Clay Regazzoni and Natalie Dormer is Nurse Gemma, a caregiver who is immediately attracted to James.

The early part of the film is largely the origin story of James, Niki and their rivalry from the Formula 3 circuit through their ascension to the F1 cars they drive for the McLaren and Ferrari teams respectively. James is a reckless English driver who’s more concerned with the spotlight and the ladies, whereas Niki is a serious Austrian racer concerned about every single detail of his car. James and Niki butt heads again and again. I really became interested in the story when it began to follow the 1976 racing season. Niki had won the world championship in 1975, and the narrative picks up speed and quality as it tracks the various events over the 1976 season, including Niki’s fiery crash in the German Grand Prix on August 1, 1976, that severely disfigures him and almost takes his life. Niki’s recovery is painful to watch, but his determination is inspirational and helps to take the film into the home stretch as Niki battles back to race again just 42 days later and James tries to stay ahead in points. 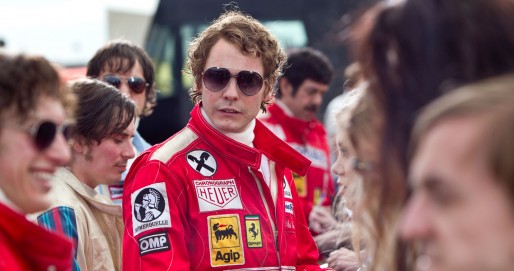 I only occasionally watch auto races on TV, so I was impressed with how the director conveyed the feeling of speed and danger in the racing scenes. Hans Zimmer’s musical score certainly helped get the blood going. I do have some bones to pick that keep this from being a four-star review. Much like Argo, the events of this film are well known and can be found within a few minutes of searching. The real story is interesting enough without resorting to silly film clichés or contrived scenes. It’s established early on that James pukes right before good races, so it’s a spoiler when he pukes in the film. Another example that annoyed me was a scene when a man asked for Niki’s autograph on the day of his crash and further asked him to add the date because you never know what might happen. Ugh. Worst of all is the promotion of the film as a Hemsworth vehicle when Brühl is the real star here with the more interesting and challenging role. It’s a discredit to Brühl and the real Niki Lauda to have a poster that just features Hemsworth. All is not lost. There’s a good throwaway reference to Hemsworth’s role as Thor, and Howard doesn’t burden the movie with period rock music, saving David Bowie’s “Fame” for a particularly appropriate moment. Rush had the potential to be so much more. Instead, it doesn’t live up to the hype and only generates a minor rumble.