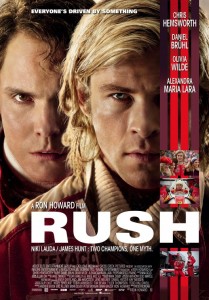 Two radically different race car drivers clash on and off the track during the 1976 Formula One World Championship season in the new Ron Howard film Rush.

Race car drivers are a unique breed. That was never more evident than the 1970s when the top speed of race cars advanced more quickly than the drivers, teams and tracks around them. Drivers were, quite literally, piloting a bomb that could go off at any moment. Every year in Formula One racing, 45 drivers competed and two wouldn’t survive to the following season. 20% of the time they raced, they risked serious injury. Why do it? Well, of course, there’s the rush —  thus the title of the film — but there’s also the rock star-like fame for those lucky or skilled enough to be able to tame the beast.

One such driver was England’s James Hunt (Chris Hemsworth). Hunt had it all. He was a naturally talented driver with a devil-may-care attitude and looks that only added to a total package that oozed manliness. He was the star cowboy at the biggest, baddest rodeo on Earth. Then, out of nowhere, came a new challenger from Austria — Niki Lauda (Daniel Brühl). Lauda was a tactician who saw the sport purely as a profitable venture that could be mastered with math, science and dedication. He wasn’t dashing and didn’t seem at all interested in the excesses. Lauda saw Hunt as a dinosaur and cad while Hunt viewed Lauda as a bore without any real inner spirit. 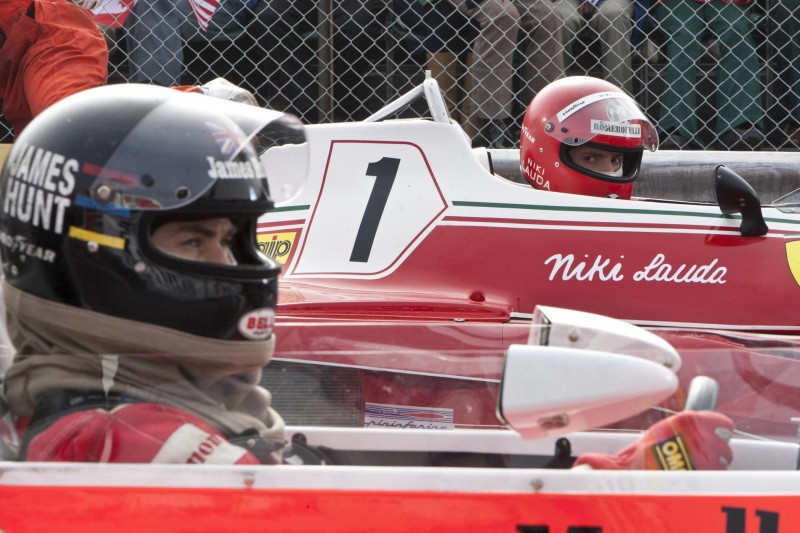 Howard’s film takes us behind the scenes of the world of these two unique drivers and presents a captivating, heart-pumping retelling of their infamous rivalry during the 1976 Formula One World Championship season. Everything about the film rings true. Hemsworth and Brühl embody their true-life counterparts, giving the audience real insight into their psyche — good and bad. The atmosphere is palpable at every turn. For the racing sequences, the camera puts us inside the cars to feel the speed, risk and utter terror of the sport. The soundtrack and audio round out the immersion perfectly.

The start of the film gives the viewer everything they need to connect with the characters, but once there, goes off the road along the way. The middle act includes some overly long sequences that deflate the energy unnecessarily. Thankfully, it finds the right gear, ultimately sprinting into a tense, emotional finale.

This is not, in the purest sense, a film about racing. Racing is very much prevalent throughout the movie, but it’s much more about the two drivers and how they feed off one another to become more than they ever could be alone. Non-racing fans won’t feel at all left behind by the lingo. Racing is just the canvas on which this colorfully powerful story is painted.