The latest Nicholas Sparks novel to be filmed is Safe Haven. It’s another romance surrounded by elements that threaten an otherwise obvious love affair. I must admit that I’m a huge fan of The Notebook which has gotten me no shortage of curious looks from various friends but I still contend it’s a great love story. 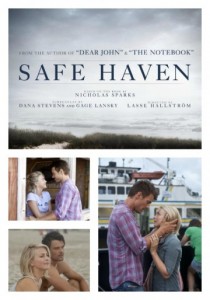 This time around the tale starts by showing us a woman we later recognize as “Katie” (Julianne Hough) covered in blood, fleeing a house, while a body lies motionless on the floor (and also sporting some blood). She dyes and cuts her hair and then flees to a bus station with the Boston police right behind her, including one detective who seems as if it’s his life work to catch her (David Lyons).

She manages to find a sleepy southern town far from the city lights and the radar of the authorities. It’s here that the story falls entirely apart. It starts with her getting a job in a local restaurant without having to provide any sort of identification or explanation. It’s one thing for that to happen with owners of unscrupulous businesses but it’s entirely another for it to happen at a regular, well traveled restaurant. The owner simply asks if she has any experience and when she replies that, why yes, she does, well then, the job’s hers. If jobs were this easy to get then there’d be virtually no unemployment.

As the story unfolds we meet a widower, Alex, (Josh Duhame) and his two children. Katie and Alex are, of course, destined to be lovers but it’s all just hogwash. The scenery is terrific. The acting is mainly solid as well. However, the script just refuses to come along for the ride.

One of the biggest problems with the writing is that it literally cheats it way along for half the film. I hate spoilers but it’s nearly impossible here and, frankly, this mess deserves it. The film purposefully makes us believe that Katie is, in fact, a murderer. Our entire mindset settles in on this until, in flashback after flashback we slowly see that, no, she’s a battered and abused wife on the run. Why not just tell us that from the start? I get that the idea was to make us understand the challenges facing Katie but it’s entirely unnecessary.

The oddity is that Katie’s reactions to virtually every challenge make little, if any, sense regardless of the perspective. She’s not the only casualty. Much later there’s a set of letters that are key to the plot. One is extremely touching and meant for the love of Alex’s life. Alex gives Katie this letter even though it’s clear they’ve only been dating a short while. It seems entirely forced until you get to the final disgrace.

This last example is so off-the-charts ridiculous and unnecessary that it’d be the equivalent of having a character whisked off into an alien spaceship. I think I’d have almost preferred that.

This is another example of a story that could have been something special. The pieces are here and you feel it working on your emotions time and again only to disappoint you over and over.