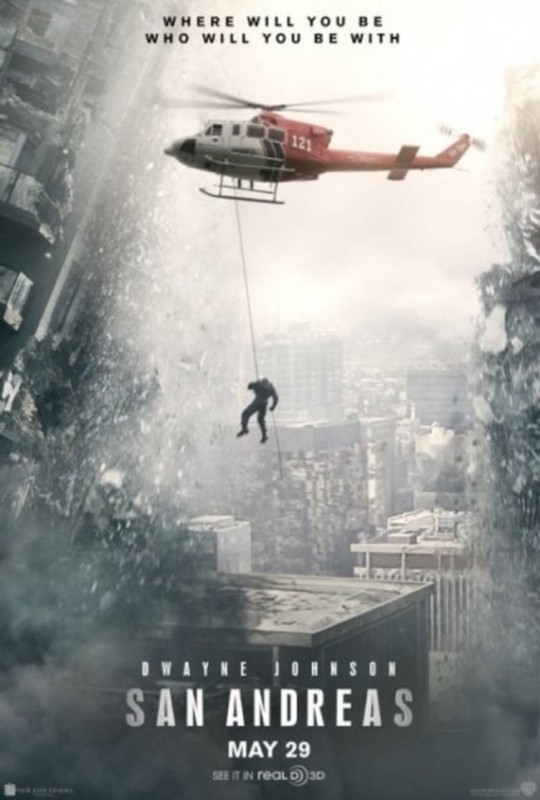 Disaster movies are an entirely different breed. In most cases, they are over-the-top special effects showcases where the goal is to see how much destruction they can cram into the running time. Unfortunately, special effects are getting cheaper and more prevalent, so today’s disaster movies show no restraint. San Andreas is such a movie. It would be right at home in 2014 with Godzilla, Noah and Pompeii. This gem follows on the heels of Dwayne Johnson’s much better Furious 7. San Andreas invokes every cliché under the sun and mixes them all together for a film that rises in levels of ridiculousness in synch with the amplitude of the seismic waves on the Richter scale.

Director Brad Peyton previously worked with star Johnson on Journey 2: The Mysterious Island, and they’re already scheduled for a third film in that series. Writer Carlton Cuse was one of the key writers and creators of Lost, so maybe that’s where all of the stretching of real-world physics comes from. Ray Gaines (Johnson) is a rescuer and helicopter pilot, among many other skills, for the Los Angeles Fire Department. Evidence of his ability to work under pressure is the silly opening sequence in which a young lady who should be dead at least twice after first reaching for a water bottle and then texting while driving. She requires rescue when she finally goes off a cliff. I gave up all hope for common sense and realism after that sequence. It doesn’t get much better.

In a plot point stolen right from another disaster picture called Twister, Ray has divorce papers waiting for him to sign. Estranged wife Emma (Carla Gugino) already has a new boyfriend, big shot architect Daniel Riddick (Ioan Gruffudd). Ray is supposed to take their daughter Blake (the adorable Alexandra Daddario) on a trip, but duty calls in the form of an earthquake that rips apart the Hoover Dam and begins destruction in Los Angeles. In a bad casting decision, Paul Giamatti plays seismologist Dr. Lawrence Hayes, and his predictions of “the big one” are coming true. With Ray unavailable, Blake goes to San Francisco with Daniel in a “take your girlfriend’s daughter to work” day. Job candidate Ben (Hugo Johnstone-Burt) and his little brother Ollie (Art Parkinson) meet Blake in the lobby of Daniel’s headquarters, and when Daniel gets separated from Blake, the brothers team up with her to survive. As the devastation hits Los Angeles and moves up the coast along the titular fault to San Francisco, Ray and Emma come together despite their differences in a trek to find and save Blake.

I’ll just make it simple. The only reason to see San Andreas is for the special effects. They are spectacular, and it’s fun to watch buildings topple and all manner of destruction happen up on the screen. From beginning to end, the scenes get more and more elaborate. By the time the story reaches the streets of San Francisco, there doesn’t seem to be a section of the screen without some kind of digital detritus. The largest reading on the Richter scale in this film comes in at 9.6, so the extensive damage that occurs in a day or so will easily take a decade of rebuilding. This is a PG-13 movie, so there aren’t gratuitous death sequences or lots of blood and gore. That makes it easier to chow down on the popcorn and watch California suffer from mostly distant shots without visible people or corpses. You know that iconic buildings and landmarks are going to topple, and San Andreas doesn’t disappoint in that department. 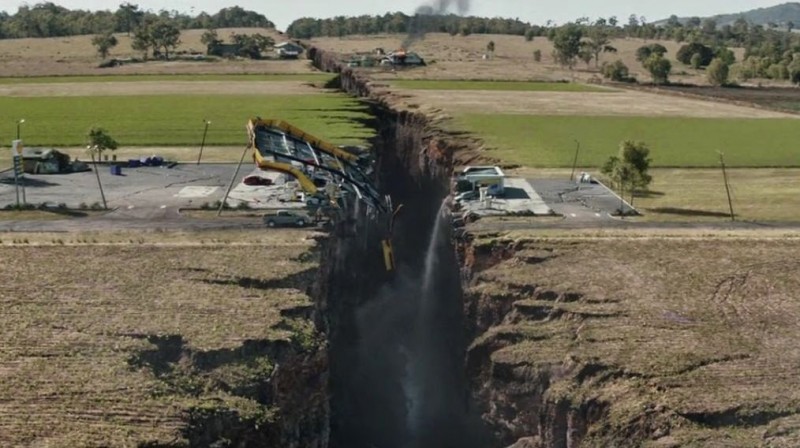 Where the film completely falls apart is its believability. From the opening sequence in which a helicopter is made to do things that physics doesn’t support, you will laugh again and again at the silliness of it all. In the real world, Ray would ignore any calls from his wife after receiving divorce papers instead of making a daring rescue. That would take the plot in an entirely different direction. Time and again, it’s mentioned that the cell phone towers are down and all cell communication is out, yet there doesn’t seem to be any problem for Blake, Emma and Ray to communicate with each other when it’s really needed. I know that Johnson is pretty athletic and talented. It’s amusing to see how many skills that Ray knows. He can hang from a helicopter, pilot a boat and skydive with ease, yet he can’t figure out how to keep his wife happy and interested? I don’t buy it. In fact, I don’t buy any of it, and that’s the major problem with San Andreas.

Johnson is so likable as an actor that he almost sells this movie. I’m a big fan of Gugino, too, so it’s nice to see her in a major role here, even if it’s preposterous, and on the small screen in Wayward Pines. The best disaster movies mix realistic, dangerous scenarios with people you want to succeed and live. San Andreas only gets the second part right. The best example of that formula is 1972’s The Poseidon Adventure. There isn’t a death in that movie that doesn’t break your heart, and the entire narrative is something that could happen and partially did in some ships that capsized. I have to take the filmmakers to task for the blatant product placement. A scene in Hayes’s classroom shows a sea of Apple logos on laptops. Giamatti also prominently picks up a can of Pepsi, and Johnson all but appears in an ad for Dodge Ram trucks from the way that Peyton frames a scene. I didn’t have high hopes for this film from the start. One great thing about it is that we probably won’t see another earthquake strike California in theaters for about 20 years.