A determined L.A. fireman struggles to save his endangered family in the earthquake thriller San Andreas. 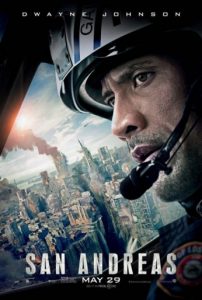 Just below California’s beautiful coastal cities lies a restless sleeping giant capable of reducing its towering skylines to a hulking mass of twisted wreckage with one fatal blow. Should the giant awake, in the form of a long-overdue earthquake, the devastation could easily take on biblical proportions. Is that a giant alarm clock I hear ringing in the distance?

Ray (Dwayne Johnson) is a top-notch first-response helicopter pilot for the Los Angeles fire department. He’s used to dealing with calamity, including in his own personal life. His marriage to Emma (Carla Gugino) was destroyed by a tragedy that neither of them could overcome. She responded by moving out and taking their daughter Blake (Alexandra Daddario) with her. As the family wrestles to find a new normal, fate steps directly into their path. When a series of earthquakes puts Emma and Blake in danger, we get to watch a film become its most obvious victim. 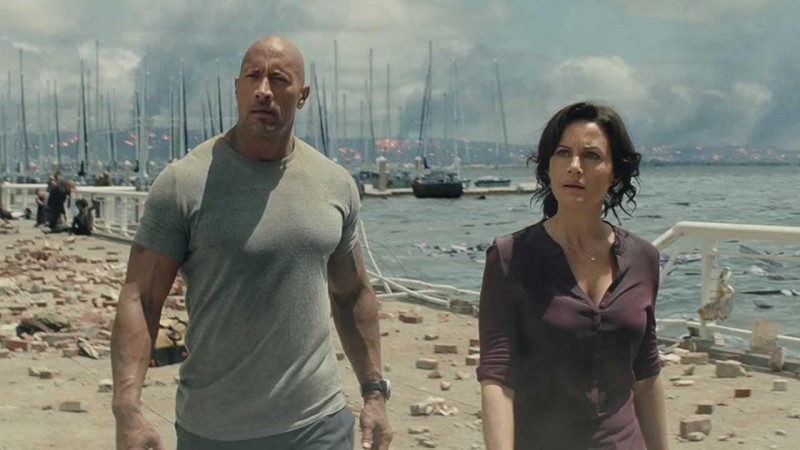 It’s not as if we haven’t been here before. 1974’s Earthquake thrilled audiences with an equally flawed plot. Of course, that film boasted Hollywood legends Charlton Heston and Ava Gardner. That’s quite a step up from Johnson and Gugino. Then again, the mind-blowing effects and frenetic action sequences are often more than enough to qualify as solid summer popcorn fare. If only the plot could stand up to more than a cursory examination.

Director Brad Peyton spends the early part of the film making sure that we know that Ray is the consummate rescue professional. For the rest of the film, we watch that entire investment vanish without a trace. When the world starts to fall apart around him, Ray’s immediate response is to steal a critical helicopter, ignore all of the dead and dying around him and rush out of town like a gazelle being chased by a cheetah. It just doesn’t make any sense. The lowbrow antics of Twister are an intellectual’s wet dream by comparison.

The writers are every bit as guilty as their hero, having pilfered plot points from every bad film imaginable. The clichés pile up as high as the on-screen rubble — and nearly as quickly. We get a bad guy so purely evil that we can’t even begin to fathom what anyone ever saw in him in the first place. Several impossible problems work themselves out by the wonder of conveniently timed luck, and the story never once tries to surprise us. Yes, it’s chock-full of exceptional effects, but it’s not enough to get us to forget our own names, which is about the level of hypnosis required to fool us into enjoying this self-immolating disaster of a disaster film.