So, in what will amount to much surprise for my friend Luke, this weekend I saw Scott Pilgrim vs. the World. What surprised me most about my participation is that the film stars Michael Cera. I’ve had a long-running grudge against the actor from his earliest roles, as he seems to always play the same exact character — badly. What others see as him playing a character that’s nerdy and awkward, I insist, is just him either playing, or being, overtly gay. He’s just not believable to me anytime he’s involved with a female character. This film was no exception, providing countless examples and opportunities to joke about it during the action.

Essentially the story focuses on Pilgrim and his interest in a girl with a dark past that includes seven Evil Exes — all of whom he has to fight and defeat to date her. 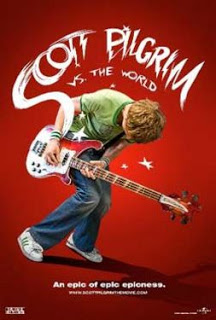 One thing you can say about Scott Pilgrim is that it’s original. The visuals and effects make up a good part of the allure of the film by design. It’s all very surreal and gives a very campy feel (but in a good way) to the effort. You get shots filled with pop-ups and graphic overlays that generally offer a comedic sub-narrative. Fans of the 60’s Batman TV show will feel right at home during every battle scene as they’re replete with emphatic descriptive text while adding its own brand of special effects.

The problem with the approach is that it can’t sustain itself for 92 minutes which is a real problem because the movie is 113 minutes long. Once Brandon Routh shows up as Evil Ex #3 the film has pretty much run out of creativity. From that point on it’s all just a one-track path to the finish. Initially the surreal elements were quite varied, but then they devolve into just a parody of a video game.

Cera does a decent job playing the lead but I have little doubt any number of other young actors would have been much better. His interactions with the opposite sex always pan out exactly as I feared. One scene, where he kisses the female lead, is so pained I felt for the actress.

The one person Cera has unmistakable chemistry with during the film is Kieran Culkin who plays, quite ironically, his scheming gay roommate. Go figure. Culkin has always been able to act and here he steals every single scene he’s in. It’s a pity his character doesn’t have a more prominent role to play. The oddity is that it’s been 8 years since we’ve really seen Culkin. That was when he gave a fantastic performance in Igby Goes Down back in 2002. He literally vanished for 6 years and then appeared in just two films I’ve never heard of. Let’s hope he’s back for good.

Keep an eye out for a few excellent cameos and subtle (and some less-than-subtle) parodies.

In the end the film was interesting, funny, but nothing special. I just wish Cera would come out and get it over with.