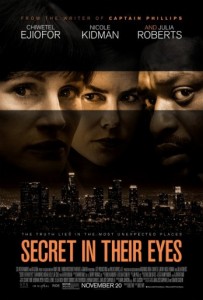 A team of investigators find their world turned upside down when a murder case hits too close to home in Secret in Their Eyes.

Almost 13 years ago, Los Angeles was caught up in a frenzy of post-911 fever. Terrorist cells could be anywhere and everywhere. Local law enforcement found itself under increasing pressure to expose terrorist plots at almost any cost. FBI agent Ray Kasten (Chiwetel Ejiofor) is put in charge of monitoring a local mosque, but he finds the whole experience driven more by politics than prudence. Left to fill his days with idle reports, he instead turns his attention to the office’s most recent hire — Claire (Nicole Kidman), a sexy, brainy, young lawyer with no objections. Ray’s closest peers Jess (Julia Roberts) and Bumpy (Dean Norris) can’t help but laugh at such a conspicuous cliché.

The paradigm plays itself over and over until a fateful call brings the team to the scene of a homicide at the mosque. It all seems fairly routine until Ray moves forward to inspect the victim. What he finds will cause a permanent, dark shadow to fall over their once-bright future prospects, forever changing all of them in the process.

This is the American remake of one of my favorite films of the last decade — 2009’s Argentinian film The Secret in Their Eyes. The original took home the Oscar for Best Foreign Film at the 82nd Academy Awards. Writer/director Billy Ray takes on the role of lead chef for the rewrite. He takes a set of winning ingredients, adds in a bit of his own flavoring, dresses it up with a top-notch arrangement and presents us with a platter best suited for your local McDonald’s.

Every change from the original is a downgrade. The cast looks great on paper. On screen, none of it works. Kidman has never been so badly miscast. She sticks out like a clown car at a luxury auto show. She and Ejiofor’s essential chemistry is as enticing as mixing water with water. Roberts fares only marginally better, often seeming to be acting in an entirely different film.

The beauty of the original is its ability to impress us equally as a drama, romance, dark comedy and thriller. The new version is just dour and dark throughout. It also suffers from far too many awkward shifts between past and present. Where the 2009 film is a smorgasbord of palette-pleasing courses, this meal will leave you hungry long before you leave the table. 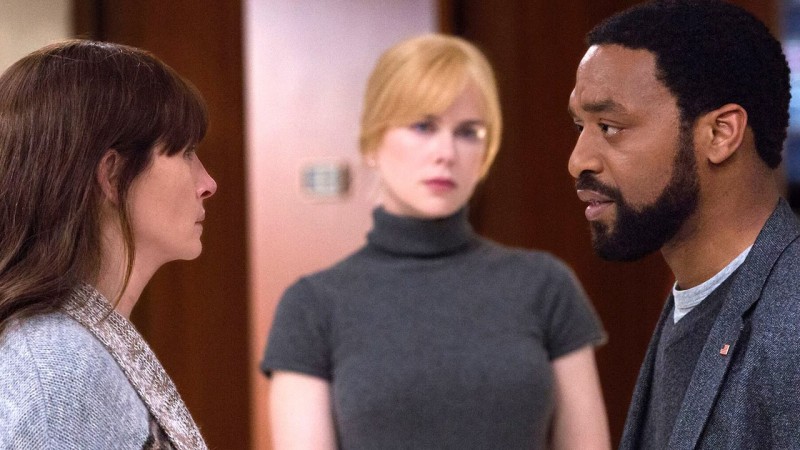