I’ve had mixed feelings about Martin Scorsese‘s films. Most recently we were offered The Departed and while much of it was clearly brilliant the plot had holes big enough to fly an airship through them.

Seeing previews of Shutter Island made me think quite a bit about his past efforts and how many of them seem to fail to fully impress me. Goodfellas was fantastic but I can’t even think about Gangs of New York without laughing out loud. 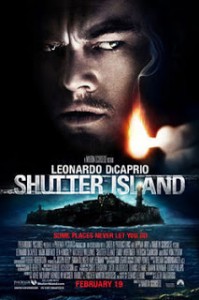 But in the end it’s Scorsese and it’s hard to be a fan of movies and not see what one of its noted masters has produced so off I went.

The movie started out a bit jarringly with Leonardo DiCaprio sporting an accent that took me a good 10 minutes to ignore. However, aside from that it managed to take hold and not let up.

Scorsese does a wonderful job of telling this story and using everything he’s learned to maximum effect. Every scene drips with realism. We get acting of the highest caliber from everyone involved. The look of every shot is just superb. Effects are applied not for the sake of the effect but to heighten the storyline with extreme precision. The first shot of the island itself underscores the attention to detail. Every nuance of the island is just what’s called for. It’s haunting just sitting there and shot from the right angles.

I also realized early on that this will be a film that demands subsequent viewings as Scorsese has managed to hide a litany of key plot elements throughout the film. The most popular example is a scene involving the questioning of female patient on the island. Upon receiving a requested glass of water we see her take a drink but the shot clearly shows no glass in her hand. The next shot, however, shows her sitting the glass down onto the table with the expected clunk sound fully intact. Was it just a continuity error? No way. It’s all part of the experience. Scorsese wants us to feel off-balance and the effect works. We question what we see and that’s the point.

I rarely notice music in a film especially when it’s not intricately essential to the plot of the movie like famous classic rock tunes in Pirate Radio. However, here the music deserves a mention. It’s pitch-perfect throughout. Every scene seems to have been matched with the most optimal score possible. Whoever was responsible deserves an Oscar mention.

The biggest issues I have with the film is that I figured out the puzzle way too soon and that made the rest of the film drag a bit. I noted that those who didn’t figure it out loved it from start to finish. Regardless this is definitely a thinking person’s film. Go in prepared to be challenged and keep your guard up at all times. You’ll be rewarded for a discriminating eye.