On Saturday I visited my brother in Manhattan. He needed some computer help and I hadn’t been up to see him in some time. 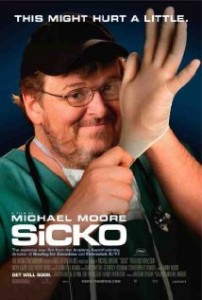 After dealing with the computer and getting him set up with a universal remote for his home theater, we headed out to see Sicko which was playing at the local AMC/Loews. I will say I am a fan of Michael Moore‘s movies. While I do admit that he’s been a bit more over-the-top than he needs to be, he’s certainly nowhere near as slimy as the conservative pundits running around out there. In fact, I suspect that much of his edge is due to being so different from the normal celebrity.

Sicko is different from the rest of his movies, especially the more recent ones, in that it seems far more mature. It stays on-focus and makes its point time and again with clear examples that rarely beg for further insight.

The movie is quite powerful. Heads all over the theater kept dropping in complete shame. It was like we’d been exposed as a tribe of overconfident cavemen living in a Jetsonian world while denying its existence. I have little doubt that the examples provided could be offset by horror stories that abound in any system but what’s most telling here is that Moore doesn’t set the table like he has previously. He just appears to randomly walk around and experience what’s there to experience. If everything here was choreographed then Moore did a wonderful job of hiding it.

The movie challenges all the various reasoning against a socialized medical solution and leaves them looking pretty lacking at every turn. He reduces the arguments to the basic facts and responds with examples that are extremely difficult to refute. How is it that the so-called richest country in the world can’t take care of its own people while so many others can?

The key point is that Sicko isn’t even about the 50 million Americans without health insurance. It’s about those who think they have it only to find, at their time of need, that they don’t have the coverage they thought they had.

Remember that I broke my leg in Canada and I, having spent a lifetime here being filled with FUD regarding social medicine, was prepared for the worst when it came to the accident. I called my wife to prepare her for a huge bill and worried about the level of care I’d get. Instead I got far better, faster care than I would have gotten here for a fraction of the cost. The irony of this is that I’m still fighting with Blue Cross to get reimbursed for the expense. In typical fashion they’ve avoided paying out using every silly excuse you can imagine. The report is in French. The report is too long. They claim not to have e-mail. They only have a fax. When I fax they claim not to get it. In a rare case for me I’ve given up hope. I’m just glad it was a broken leg and not something bigger. Now I’m worried about bigger and I’m seriously considering my options if I am diagnosed with something serious. I have no faith that our system will work for me and leave me whole at the end. If I get the help needed I’m pretty confident I’ll be left in heavy debt for the experience and I don’t want to end my time here that way.

It’s time for our country to join the rest of the civilized world and provide healthcare for everyone and to stop making excuses for the rich in this area. Our system has had generations in the free market and the free market clearly isn’t the best answer for this problem.