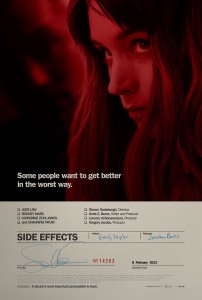 You may have been in a doctor’s office and seen well-dressed men and women with large briefcases or bags and prominent name tags. No, they’re not Mormons. These are drug reps for major pharmaceutical companies. They bring gifts (drug samples or pens) and have pizza delivered to the doctors and their staff in order to promote their latest drugs. I personally think it’s a disgusting practice because there sometimes seem to be a never-ending supply of drug reps from rival companies streaming back to the doctors’ offices more frequently than patients. Some of these drugs are the best thing since sliced bread one day and treated like snake oil with volumes of lawsuits — think Avandia — when dangerous or deadly side effects surface. Side Effects takes root in that environment as a smart thriller that explores the mental and physical results of taking the latest and greatest drug.

Director Steven Soderbergh and writer Scott Z. Burns — the director and writer of Contagion — team up again for what is purportedly Soderbergh’s last motion picture. If that’s true, then he goes out on a high note with a movie that evokes Alfred Hitchcock at his best. It’s best not to say too much about the plot because there are many twists, surprises and “gotcha” moments that you really should be able to discover for yourself without someone ruining the movie. Martin Taylor (Channing Tatum) is released from prison after doing time for insider trading into the loving arms of wife Emily Taylor (Rooney Mara) and his mother (Ann Dowd of Compliance). The couple adjusts to their new life in New York City, but things get to be a bit too much for Emily and she ends up in the care of psychiatrist Dr. Jonathan Banks (Jude Law). He consults with Emily’s previous shrink, Dr. Victoria Siebert (Catherine Zeta-Jones with glasses), for Emily’s history and then puts her on a new antidepressant called Ablixa when established brands don’t do the trick.

That’s as much as I’ll say, and you’ll thank me for it later. The film kept me guessing and delighted me with its strong plot. Mara puts in a better performance here than the remake of The Girl with the Dragon Tattoo although she was good in that film, too. In Side Effects, Mara must display a wider range of emotions without the safety of the piercings, costumes and dyed hair in that other film. Law and Zeta-Jones are as reliable as always. The supporting cast includes Dowd, Vinessa Shaw as Jonathan’s wife Dierdre Banks, Polly Draper as Emily’s boss and Mamie Gummer in a small role as a friend of the Taylors. The scenes with just Mara and Law would translate well to a stage because of the snappy dialogue that conveys most of the action in the movie. This is a thoughtful thriller that doesn’t take cheap shots or easy outs. I found it to be quite believable and worth the time I spent waiting for what would happen next.

I’m sure that the major drug companies do not like this film because of the exposure of audiences to the possibilities that drugs can both heal and hurt. If you ever completely unfolded one of the slips of paper that come with many prescriptions, you just know that reading the volume of medical talk and jargon on that page will make you throw the pills in the trash. Although the focus here is on medication, the logical extension to our actions and their results, or “side effects,” makes this movie even more enticing. I hope that I never experience depression in my life, but if I do, I can assure you that this movie will stick in my mind and guide me away from a pharmacological solution to my problems.