Oscar-nominated director David O’Russell gives us a romantic comedy starring Bradley Cooper, Jennifer Lawrence, Robert DeNiro, Jacki Weaver and more. Each of the four stars have also been nominated in their respective categories and the movie’s been nominated for best picture. 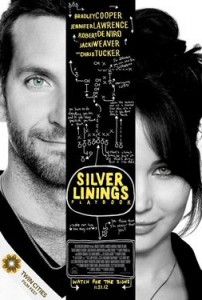 This is, without question, a quirky film that happens to have been shot locally to me using locations I’m more than familiar with. Generally that’s a recipe that keeps my interest.

The acting is, not surprisingly, incredible. Every single actor is clearly at the top of the game. The chemistry between each of them suggests that this must have been one fun film to shoot.

Unfortunately, I found that much of the film drags along at a snails pace with very little actually moving forward. Cooper’s character is extremely frustrating and hard to connect with. In fact, virtually every role in the film seems like an unrealistic and over the top caricature.

It’s clear that the message revolves around the idea that, no matter how broken or challenging you may be, there’s always someone out there perfectly suited for your brand of crazy. I just didn’t buy it. Nothing about the characters comes off as genuine and the only real moments come so late in the film that, by then, I’d lost interest.

The local nature of it didn’t work for me either. First, Philadelphia Eagles fans have a way about them and I never believed for a moment that the actors were fans. The shots of the city also felt pasted on. The final major city shot (the big romantic scene) takes place at the corner of 8th and Samson in the heart of Jeweler’s Row was beautiful but also entirely fake. That corner is pretty dirty and populated. Here we get the two stars walking all along it entirely alone. Picky? Yes. Imagine watching a scene at Times Square without anyone around in any camera angle. It’s almost the same thing.

This is yet another best picture nominee that I can only scratch my head in wonder about. The acting nominations make total sense. Cooper and Lawrence are clearly headed for amazing careers but the story just isn’t my cup of tea.