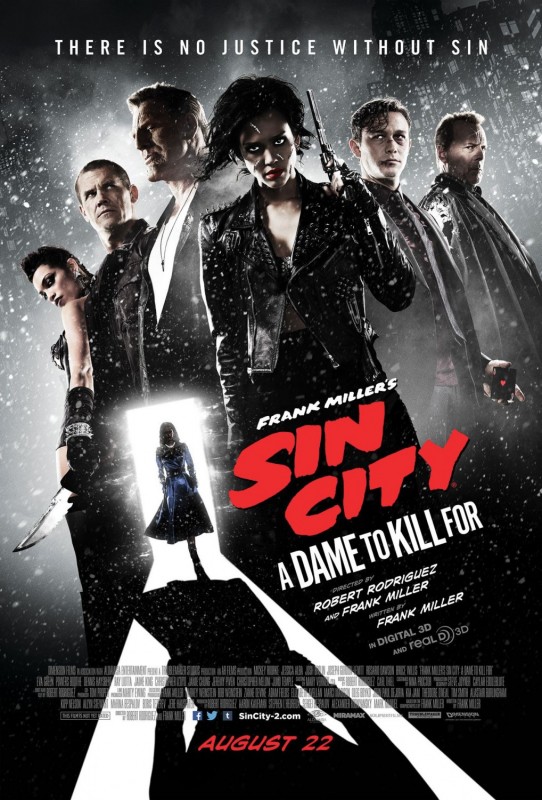 I especially love comic books and graphic novels that take chances or push the limits of the medium. Frank Miller’s Sin City graphic novels wowed fans of comics with their art, storytelling and noir style and feel. Those elements carried over to the film adaptation, still one of my favorite comic book ports to date. When a film like Sin City is successful, it’s no surprise that a sequel comes out at some point. It took over nine years, but Sin City: A Dame to Kill For continues the uniqueness of presentation that grabbed my attention in the first film. It hits you as hard as a dive off a bridge into concrete. This is mostly a prequel, which conveniently resurrects some characters who were offed in Sin City. Standing on its own, Sin City: A Dame to Kill For is a work of art equal to its predecessor. When you examine them together, some of the flaws in the organization of the narratives rise to the surface.

Writer/codirector Miller and codirector Robert Rodriguez (director of the Spy Kids and Machete films, among many others) reunite for another go at this wonderful method of presenting stories that jump right off the pages of the best pulp fiction graphic novels. The books were mostly black and white with occasional colors to highlight certain elements. The directors took this approach to the films, so the scenes have a lush, detailed look in which colors pop off the screen as red blood runs in the streets or characters’ eyes receive special highlights. This technique is as close as it comes to stepping into the environment of a comic book. Some people call this gimmicky. If there were movies released every year like this, I would agree. The gap between movies is long enough to whet the appetite and not reach the point of overkill.

The filmmakers adapted two of Miller’s stories from the graphic novels — the shorter “Just Another Saturday Night” and the titular piece — and merged it with two new narratives — “The Long Bad Night” and “Nancy’s Last Dance.” The stories weave in and out of each other, and the trick that both films pull off is how these tales feel connected despite their separate origins. If you’re a fan of Sin City, you will try to fit all of the characters and stories together, which is frustrating because most of the events in this film take place before the first one and some of the characters now have different actors portraying them. It would be a much better trip to the movies for someone who actually didn’t see the first film or read any of the graphic novels. In fact, it would have been more satisfying if Sin City: A Dame to Kill For was first, Sin City was second and Miller created a whole new set of stories for a third movie. I’m just nitpicking here because I walked out just as blown away as the first time.

The action begins almost immediately with “Just Another Saturday Night” as Marv (Mickey Rourke in heavy makeup), a hulking brute of a man, tries to figure out how he ended up in a car wreck. This segment is a perfect taste of the style, especially for newcomers, because it mixes narration, violence and cinematic touches like Marv’s billowing jacket and shots of the city from high cliffs. Although Marv is part of the other stories, they really focus on lucky man Johnny (Joseph Gordon-Levitt) and his interactions with Senator Roark (Powers Boothe) and the love affair between Dwight (Josh Brolin) and Ava (Eva Green). Bruce Willis returns as Hartigan in a much smaller role, and it’s refreshing that Miller switched his focus to the new characters rather than provide a lot of Willis and Rourke. Jaime King also reprises her roles as twins Goldie and Wendy more for continuity than anything else because of her short screen time.

I’m quite impressed with all three newcomers to the series — Brolin, Gordon-Levitt and Green. Lighting and shadows accentuate the chiseled good looks of the men and the curves of Green, and their acting styles fit this noir world nicely. Green has established a reputation as a daring, saucy actress in other films like The Dreamers and this year’s 300: Rise of an Empire. She’s naked or flimsily dressed in almost every one of her scenes and perfectly captures the spirit of a screen siren. Jessica Alba reprises her role as the stripper Nancy and even shows off her seductive dance moves in the films’ central bar location; it’s just hard for her to compete for attention against Green’s commanding performance. Brittany Murphy and Michael Clarke Duncan died in the time period between films. Dennis Haysbert ably replaces Duncan physically. It would have been better if he had no dialogue because I’m reminded of all of those Allstate commercials every time that I hear his deep, distinct voice. Rosario Dawson is back as Gail in a smaller role, and there’s a great list of supporting cast members who make the most of their few minutes on screen. Ray Liotta, Christopher Meloni, Jeremy Piven, Christopher Lloyd and Juno Temple are only in a scene or two. Jamie Chung replaces Devon Aoki as Miho, a dangerous woman who wields swords as well as, if not better than, Michonne in The Walking Dead. There’s one distracting cameo — you’ll know it when you see it — but it’s pretty significant to assemble a cast of this magnitude and have it not be stunt casting. 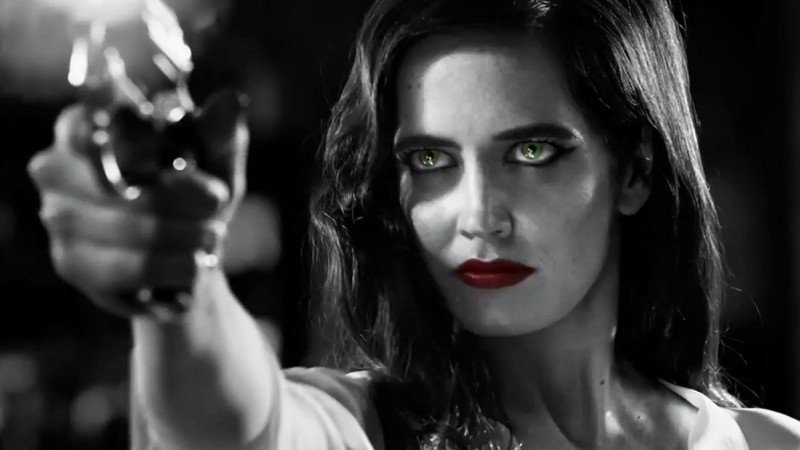 The visuals are every bit as important as the story and acting here. I still don’t like 3D in films, so even the effects like glass or blood coming out of the plane of the screen don’t do much to enhance the experience. I would suggest seeing this movie in 2D to appreciate the richness of the graphics. The few colors that mark scenes are welcome among the shading. Notable touches are the pink skirt and red hair for Sally (Temple) and Ava’s green eyes and blue dress. Ava’s eyes also serve as a symbol of her greed and envy. Characters move and, indeed, fight with a grace and rhythm that draws you in and forces you to pay attention to every detail. The violence is bloody and quite graphic at times — humorous, even, with some of Miho’s blade attacks. The directors kept this violence on the cartoonish side instead of making it all too obvious by painting the blood splatters in white or pale yellow rather than red. The opening titles use character images from the graphic novels as the matching actors are listed, and Ava is naked even in this introductory image.

There’s so much to like about this film. I’m concerned that many moviegoers will just not get the subject matter, which might stand in the way of the filmmaking style itself — the real draw. This is pure noir from start to finish. The dialogue is heavy at times and elegantly simple at others. “Gail. She’s reason enough for opening my eyes.” That’s an example of the latter, and much of the humor is embedded in the dialogue as well as the over-the-top situations and action. The graphic novels were very popular, as is anything released by Miller these days. I hope that I don’t have to wait nine more years for another movie like this. Style and substance expertly join a great cast that chews up the scenery in Sin City: A Dame to Kill For.