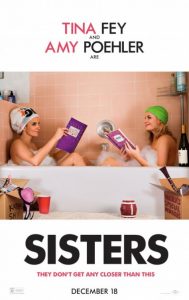 There was a Saturday Night Live skit that I liked in which Amy Poehler played a hyperactive girl named Kaitlin who repeatedly annoyed her stepfather Rick (Horatio Sanz). Poehler would climb all over everything and repeat Rick’s name ad nauseam. You could really feel for Rick because he loves Kaitlin and doesn’t want to scold her, but at the same time, he can’t take it anymore and needs to shut her up, slow her down and stop her shenanigans. This describes exactly how I feel about Poehler and her longtime collaborator Tina Fey in their new movie Sisters. I really like those two as comedians and awards show hosts, but in this project, their work is painful to watch and hard to tolerate for more than a few minutes. Sisters proves that even the best of friends and costars can be ruined by a bad script and even worse pacing.

All of the elements are there for what should have been a rollicking comedy instead of a jumbled mess. First, the movie is rated R, which gives a film a lot of leeway as far as the type of comedy and language that are possible. Second, director Jason Moore has experience on TV shows and one hit with Pitch Perfect. Third, Paula Pell is a veteran SNL writer who has worked with Fey and Poehler before. Fourth, the two leads are unstoppable when they get in synch and play off each other’s strengths. Put that all together, and you should have a hit film to keep you laughing from start to finish. Unfortunately, I mostly cringed at elements like the dialogue that makes fun of an Korean woman’s name and tired scenes like a room cleaning montage and a silly dance number. This may be a case where the twisted Sisters would have fared better in the costars’ control.

Kate Ellis (Fey) and Maura Ellis (Poehler) are sisters — not twins, thankfully! — in different lines of work and cities. Kate is a single mom struggling as a hairstylist of sorts who loses her job, and Maura is a nurse who at least has a decent job. They go to Orlando when their parents (Dianne Wiest and James Brolin) announce that they’re selling the family home. What the parents don’t tell them because they don’t want any arguments or stalling is that the house is getting sold in a few days. Kate and Maura mope around their house and bedroom that’s still adorned with their teenage interests and idols before they decide to throw the party of all parties to say goodbye to their old home. Of course, nothing goes as planned, from uninvited guests to disasters.

The cast is promising, so I blame the filmmakers for not making the most of their talents. Fey and Poehler have such a natural chemistry and ease with which they approach all of their projects that they make their characters believable within a few minutes. The problem with the film is that many of the scenes seem like skits or little movies strung together instead of a coherent plot or direction. Fey and Poehler make the most of the weak material, but they simply don’t carry the movie. Ike Barinholtz gets a lot of screen time as a neighbor named James. Maura makes googly eyes at him, but I just couldn’t get past the fact that he looks like he’s related to Mark Wahlberg.

As one of Kate and Maura’s weird friends, current SNL cast member Bobby Moynihan steals every scene, even when he’s in the background with Fey and/or Poehler in focus. His character is the only one who feels like he belongs in a comedy. Wiest and Brolin are fine in their limited screen time. There are small roles for other actors like wrestler John Cena and John Leguizamo, and other SNL players show up in what are essentially cameos. Whereas Moynihan saves the day many times, Maya Rudolph is dreadful as an old rival of the sisters. She overacts and makes lots of strange faces as she delivers her lines worse than a first-timer in a high school play. I winced every time that she appeared, and her scenes just took me right out of the movie.

Comedy is really tough to get right on the big screen. Once you make audiences laugh, you can’t let them stop or get bored. The script is too weak and forced to keep up that momentum. The party scenes are notably better than the first half of the film, but at that point, it is almost too late to bother. Moynihan kept me giggling or outright laughing, so maybe the movie should have really started with the party and gone on from there. Instead, two hours seems like an eternity when there’s nothing funny going on. Even worse, there are a few scenes about relationships between the sisters and their family members that needed to be cut. I can remember only one scene that is outright hilarious, and a great comedy would offer too many instances like that one for me to single it out.

I haven’t given up on Fey and Poehler. There’s a great film yet to come with them as the leads. Just like Melissa McCarthy has struggled with her character choices since her early success with Bridesmaids, Fey and Poehler have some other stops along their journey to a memorable comedy. The R rating introduces adult humor and language, but both Fey and Wiest dropping F-bombs is not funny just for the sake of saying them. Impactful cursing in comedies is almost as important as the timing and jokes, so it’s amateurish to have characters curse with no punch line beyond the language. There’s a big difference between movies with SNL origins like The Blues Brothers and Superstar. In the first, well-written, familiar characters are placed within a plot and allowed to grow. The second is a tired SNL bit stretched to fill a running time that it doesn’t deserve. Sisters is more like the latter. This comedy could have been a triumph for its leads. Instead, Sisters makes me wary of any future team-up. 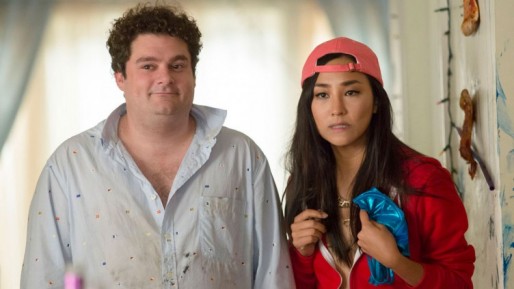