Sleepwalk with Me isn’t your typical Hollywood fare. It’s a bit of an odd mix of a straight-forward light comedy mixed in with a rather intriguing and interesting documentary style. The film purports to give us a glimpse of the real life of stand-up comedian Mike Birbiglia. 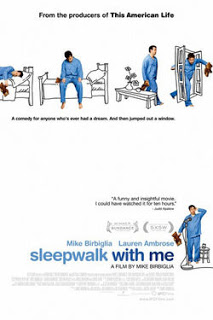 Mike is very much your average fish-out-of-water type. He seems to go through life continually challenged by most any interaction and yet decides to take up stand-up comedy. We also get to see his transformation from would-be comic but bartender to the epiphany that finally launches him on a career path. Whether or not that’s a good path is what we get to find out.

The title of the film is a reference to one of the funnier bits about the film that’s best to not divulge here. Suffice to say that Mike has a sleeping problem and leave it at that. The real charm of the film is in the down-to-earth manner in which we learn about Mike. Nothing here, as crazy as it might seem initially, feels at all contrived. There’s no overt glitz, no crazy soundtrack. It’s just a diary and some video and some great story telling.

While the movie is very understated in its approach it’s also incredibly well thought-out and delivered. If Birbiglia’s stand-up routine is as well organized and presented as this film then it’s got to be a very good experience.