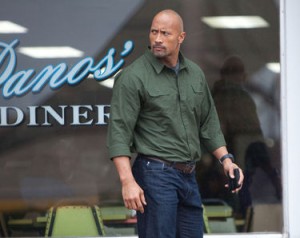 When you look like Dwayne Johnson and sometimes enter an arena as The Rock, it’s tough to escape tough guy roles and action movies. Diversions include bad films like Tooth Fairy. Although there’s a living to be made as an action star, it’s no surprise that Johnson wants more challenging roles. Snitch—not to be confused with that wonderful Guy Ritchie film Snatch starring action star Jason Statham—really caught me off guard. The trailer shows Johnson in typical action movie scenes like driving a big rig in a vehicle chase. Instead, Snitch may be just the right kind of movie for Johnson in that it’s mostly a drama with a star who can easily handle any action scenes added to the mix.

The origins of Snitch are a 1999 episode of Frontline that explains why the film is advertised as inspired by true events. I didn’t see that TV show, so I’m not sure how closely the movie keeps to the real case. There are a lot of things that don’t make sense legally, so I would guess that the filmmakers took some major liberties with the story. Cowriter/director Ric Roman Waugh (writer/director of Felon) and cowriter Justin Haythe (cowriter of The Lone Ranger and writer of Revolutionary Road) adapt this Frontline episode effectively. John Matthews (Johnson) is the owner of a Missouri construction company and some tractor trailers that the company uses for shipping. In a situation that I really can’t believe would happen, John’s teenage son Jason Collins (Rafi Gavron) accepts a package for a friend that contains pills. In a matter of minutes, DEA agents swarm the house and Jason is soon in prison facing a minimum sentence of 10 years because his friend snitched on him. I thought that they used common sense to enforce certain drug laws, but I imagine that there are probably more people set up like this than seems right.

John tries to be a good father as well as a responsible businessman, so he somehow convinces U.S. attorney Joanne Keeghan (Susan Sarandon) to give his kid a break if he can deliver higher drug dealers to help her conviction rate. Agent Cooper (Barry Pepper with a weird beard) assists John in his efforts, and John uses ex-con employee Daniel James (Jon Bernthal of The Walking Dead) to make friends in the drug world, including Malik (Michael K. Williams) and Juan Carlos “El Topo” Pintera (Benjamin Bratt). John can use his trucks for transport, and the film is largely about John’s efforts to help his son instead of the action scenes that dominate the trailer. This dramatic focus puts Johnson in a good position to obtain other similar roles. It would never work for him to star in a musical like Chicago, but a part like that in Snitch fits him nicely. It’s completely ridiculous that any drug dealer worth his weight in cocaine would trust some new guy like John, but if you accept this premise, the rest of the film succeeds.

Bernthal made a lasting impression on The Walking Dead as a complicated character torn between sides in the zombie apocalypse, and he proves here that he can move to other projects in film and television. Sarandon sadly doesn’t have many scenes to balance Johnson. I would have liked to have seen more of Pepper, too, but he’s relegated to a supporting role. The few action scenes bump up the tension and round out the movie more. Perhaps the marketing people thought that they couldn’t sell the film as a drama about the lengths a father will go to in order to save his son, but if they had, nobody would be disappointed.