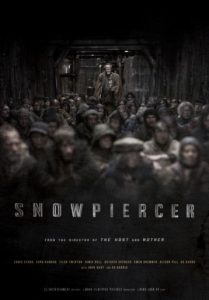 The poorest survivors of a global meltdown fight an oppressive class system aboard a perpetual-motion train in Snowpiercer.

The year is 2031. With global warming growing worse 17 years ago, the people of Earth conceived a grand plan to restore the world’s climate. They sprayed the atmosphere with a chemical that, instead of solving the problem, dramatically speeded up its effect, throwing the Earth into a new global ice age. The only survivors now live aboard a futuristic train designed by a visionary engineer, known only as Wilford (Ed Harris), who foresaw the catastrophe. This miles-long train travels endlessly around the now-snowbound planet, keeping its inhabitants out of the claws of the frozen landscape just inches beyond their confines.

Not long after the survivors boarded the train, a harsh line is drawn between the elites and the poor. The latter are relegated to the last car of the train, living in filth and forced to subsist on bland, jello-like protein slabs. Several attempts to break out of the squalor have all failed, but a new group of prisoners, led by the contemplative but daring Curtis (Chris Evans), hopes to finally take over the train and free themselves from their imposing bondage. 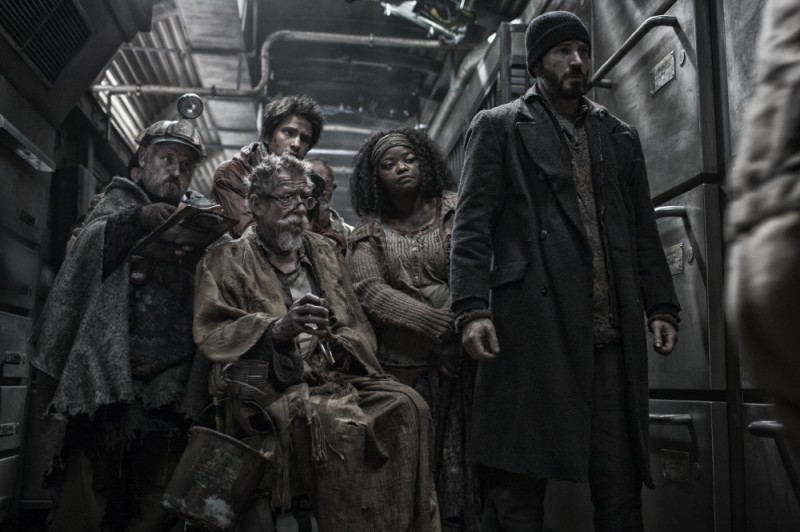 The film is an adaptation of a French graphic novel titled Le Transperceneige. It boasts a heavy comic book feel, immediately reminding me of 1995’s Waterworld with a twist of 1981’s Time Bandits — for better or worse. The visuals are quite captivating, shot with lots of muted, shadow-laden grays and browns perfectly matching the dour atmosphere that the rebels have to endure. The characters are eccentric and exaggerated, typical of the comic book genre — no boy-next-door types here. It’s also heavy with graphic action sequences throughout its roughly two-hour running time.

I’m pretty confident that this will go over quite well with comic book fans. I, however, have never been one. Viewed from the perspective of a mainstream film, there’s much to find off-putting. Many of the characters are, as expected, fairly strange and anything but normal. Physics, of course, checks out the moment you combine the term “sci-fi” and “comic book.” Logic isn’t too far behind. For example, it’s never made all that clear why the train has to keep moving along at all. There’s some vague reference to the train’s power being driven by motion, but a huge treadmill-like device would surely be a lot more feasible than a world covered in tracks. Speaking of the tracks, there’s no one to service them, but they somehow no longer require such trivial upkeep. These aren’t futuristic tracks, either. Remember that they would have been laid in our own time.

A number of other key questions come to mind, but the answers wouldn’t really satisfy anyone trying to apply reason. This is a film in which fans will revel and for which non-fans will shake their heads in bewilderment. You’re either an eager passenger or someone willing to wait for some other mode of transportation.