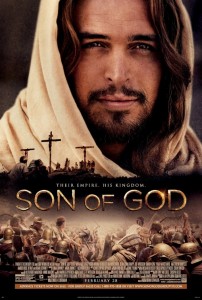 A humble prophet builds a following and, with it, the ire of religious leaders in Son of God.

This latest retelling of the Savior’s classic story is an extension of a 10-hour TV miniseries — The Bible — that aired on The History Channel last year. Director Christopher Spencer was at the helm for three segments of the miniseries and shot additional scenes to fill out this feature-length film. The original project was brought to the screen by reality TV magnate Mark Burnett and wife Roma Downey. Burnett called it the most important project he’s every produced.

This version spans Jesus’s life from birth through resurrection, but as with most such stories, it spends much of its length in the last days of his time on Earth. It’s told in flashback narrative form by John (Sebastian Knapp), now in exile and the only remaining apostle.

We all know the main story. As Jesus’s influence rises, spurred on by his performance of a number of miracles, so does the concern of the local Pharisees (Jewish religious leaders). They’re concerned that this potential blasphemer could create a distraction, thus causing Roman leader Pontius Pilate (Greg Hicks) to close their temple for Passover. In a hasty, highly questionable trial, Jesus is sentenced to death by crucifixion. 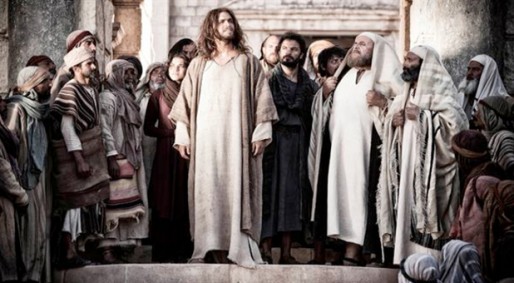 “Hey man, check out those dudes up on those crosses. Radical.”

This highly reverential story deserves the utmost care and respect, which sadly seems quite lost on Burnett and gang throughout this entire mess of a film.

The most egregious mistake starts with the laughable casting of many of the biggest characters. Diogo Morgado, as the Messiah, looks like he’d be most at home modeling fine menswear in a top fashion magazine. He flits about Jerusalem like a stoned surfer, endlessly fascinated by all of the attention placed on him. Hicks, as Pilate, would have been fine if someone had just told him that every scene didn’t require a permanent scowl. The worst disaster of all belongs to Downey as the Virgin Mary. Her inclusion in this film is absolutely laughable and downright insulting. Downey is a stunningly beautiful woman, but it’s clear she’s had substantial plastic surgery. Her inflated lips, puffy artificial facial features and flawlessly coiffed hair are unfailing distractions in every scene she inhabits. It’s as if someone decided that the best way to portray Mary would be to make her look like a dolled-up whore. The realistically portrayed characters end up looking out of place by comparison.

If only the visuals were presented as robustly as the cast. Panoramic shots are often dominated by woefully low-resolution, often out-of-focus CGI-based structures. This is coupled with camera shots that defy explanation, including the final one where we inexplicably zoom into Jesus’s left eyeball. Why his eyeball? You’ve got me.

Its only saving grace is its powerfully effective crucifixion sequence, which could have been improved greatly had the camera panned back to reveal the production team nailed up there to share in Jesus’s fate.