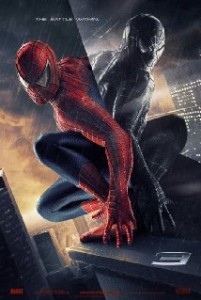 Spider-Man 3 started off the bad luck of a bad, bad weekend of terrible third installments in major franchises. I enjoyed both previous movies but this one went terribly wrong early on. The entire middle section was a complete joke and the ending did little to undo the damage.

The only bright spot I could find in the whole movie was Kirsten Dunst. For someone who isn’t my type she still managed to sizzle while on screen  Everyone else looked like they were walking through it.

I also thought Thomas Haden Church was entirely miscast and that his character was terribly written. If they continue on, they’re going to have to regroup and start over.

Don’t even get me started on Tobey Maguire. It’s not his fault but, come on. Imagine having to actually portray a good and evil character and the director tells you that the main difference between them (physically) is that one has his hair parted to one side and the other has it parted to the other side. Give me a break — and a refund.